According to Vaquera's designers, New York is dead. What's going to save her? Love, art, beauty? Maybe. 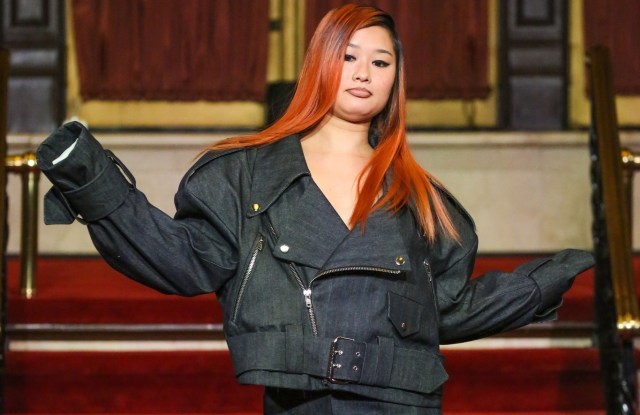 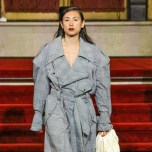 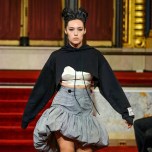 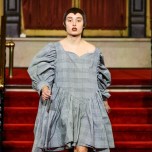 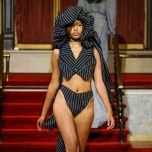 According to Vaquera, New York City was found dead on Sept. 9. Cause of death? Heartbreak, boredom, frustration, disappointment.

The (fake?) news was announced in the brand’s show notes on Monday night at the Masonic Hall.

To mark the moment, Patric DiCaprio, Claire Sullivan and Bryn Taubensee organized a funeral-slash-runway show that resembled an eccentric funeral parade, which kicked off with a boy sporting a T-shirt that proclaimed, “In loving memory of New York.” The pin-striped fabrics of iconic Wall Street suits were manipulated to create, for example, a cropped blazer with exaggerated shoulders worn with a puffy, draped skirt, as well as a vest paired with distressed denim shorts and a micro bib-like top worn with panties that sported a train on the back.

The nocturnal section of the show also included a silk slipdress punctuated by lace inserts, as well as a giant denim perfecto jacket paired with a puffy skirt, and culminated with pretty black evening frocks, including a ruffled one worn by a model wearing a black veil and holding sequined fabric red roses.

If that look marked the climax of the funeral parade, it also opened the way to a moment of renaissance. What will save New York and bring her back to life? Maybe love? A giant heart popped up on a roomy pale pink dress with a maxi bow at the collar. Beauty? A strapless frock with a cascade of ruffles stole the spotlight with its audacious femininity. Music? Musical notes were splashed on a shiny suits, including one with an oversize jacket that was paired with a pink shirt and a giant untied tie printed with the image of a saxophone.

While continuing to walk on their signature wild side, this season the Vaquera designers found a way to translate their irreverent eccentricity into more approachable and wearable designs without any loss of authenticity.

Right before Vaquera, the same catwalk at the Masonic Hall hosted the show of Chris Peters’ CDLM. The unisex lineup, based on the concept of upcycling, featured a patchwork of multicolor rugby polos that gave shape to a cool maxidress enriched with a crocodile printed leather patch pocket; a vintage souvenir T-shirt revealed an inlaid scarf on the back, while white floral jacquard dresses were punctuated by rivets to create draped silhouettes.