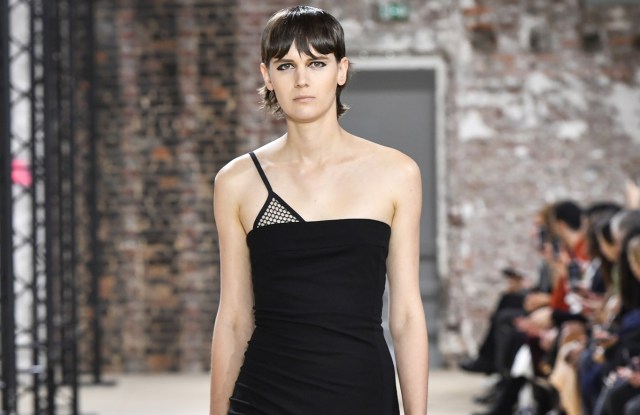 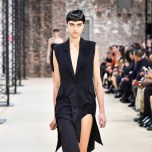 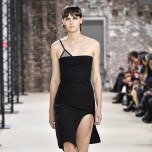 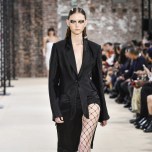 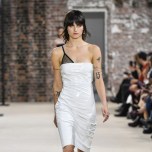 Did Sébastien Meunier take inspiration from the popular “goth in summer” meme? For spring, the designer delivered an almost entirely black collection, save for a couple of white looks and one blood-red evening gown.

It was a more structured offering than usual. Gone were the trailing shirt cuffs and hemlines, the New Romantic silhouette that had become Ann Demeulemeester’s signature over the years. This collection has something subversive about it, from the black pencil skirts with the swirling cutout front revealing the model’s thighs to the sexy fishnets tights and dresses. Some looks even featured cheeky one-shoulder fishnet bras, the top of which just peeped out from under a bustier dress.

Bags were teeny-tiny and attached to metal chain straps; earrings came in the form of single metal balls dangling at collarbone level. The models’ hair was slicked back and they sported smudged kohl around their eyes. Vinyl coats and skirts gleamed under the spotlights, sleekly sexy, while some models spotted bondage-style leather harnesses over wispy see-through knits or naked skin, a bold black strip of leather reminiscent of old-school censorship methods on primetime television.