Designer Hidenori Kumakiri created a versatile wardrobe in which clothes were meant to be worn 24 different ways. 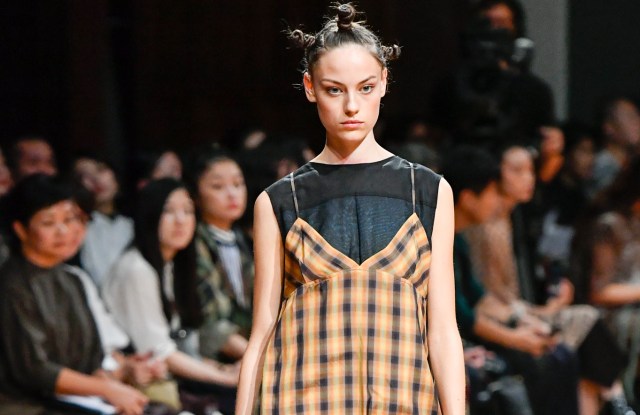 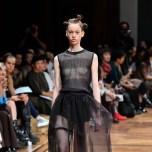 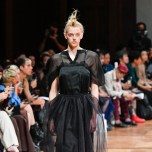 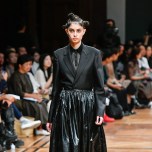 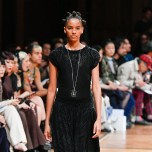 The show started in darkness, with two figures dressing and undressing a model to demonstrate how the same garment could be worn different ways. Twenty-four ways, to be exact — although given how arduous it looked to flip a garment in merely four versions, it maybe wasn’t the best idea to showcase the collection’s versatility.

That didn’t stop the show that followed from being visually pleasing and entertaining. A plaid spaghetti-strap dress looked simple enough until the model turned a corner and revealed that the back of the silhouette was covered in a black knitted dress, its short sleeves flapping over the model’s shoulders. Same thing for a simple black silk slipdress that had a floaty chiffon number on its back. It looked almost like the wearer was trailing a ghostly figure in her wake.

“We decided to show extreme versions on the runway, but the main idea is that clothes need to adapt to our mood and occasion,” said designer Hidenori Kumakiri backstage. These 24 ways adapted to 24-hour days, as made visible by the rising sun and dawn prints on the front of some of the jersey dresses and pleated skirts. Knits were super fine, giving an impression of transparency, while thin cotton blazers were left see-through, their faded plaid print showing the body underneath. The collection was a bit too cerebral — viewers were more engaged in identifying a garment’s versatility than admiring its construction — and lacked the poetic character Kumakari’s creations have become known for.