“I liked the idea of escapism, travelling,” said Wijnants. 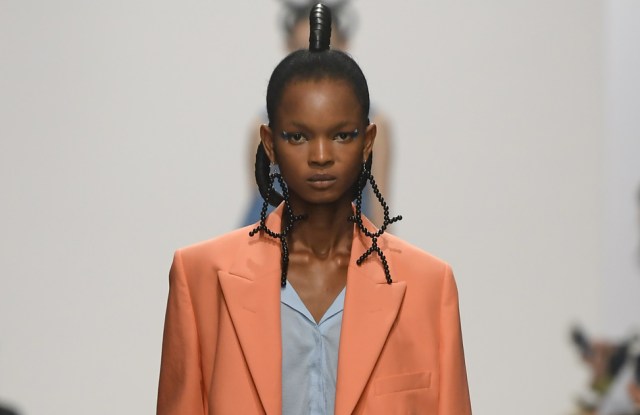 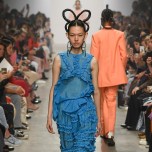 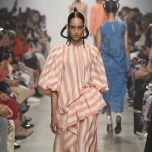 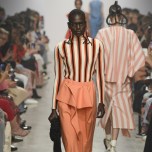 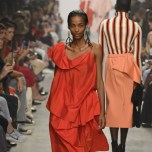 Christian Wijnants sent his audience off to some unidentifiable place — urban, chic, sophisticated, with African-flavored prints, sequins and subtle ruffles — to the tap, tap, tapping of percussion music. Black beaded earrings added extra loops and hoops. So, too, did stiff ropes of hair on the models heads — more shapes.

“I liked the idea of escapism, traveling,” said Wijnants backstage before the show.

He was absorbed by works from Los Angeles-based painter Henry Taylor last season, and the influence lingered — as seen in the colors. And also thought about African and American continents colliding together.

Animal-like prints had a backdrop of a grid of small circles — bubble wrap had served as the starting point of a new printing technique — apply paint, press on the paper.

But our prints and knits man was really out to explore shapes and volumes.

“I wanted a little more bigger-sized ruffles,” he explained, pointing to a skirt fashioned in the form of a large ruffle. It also carried strips of smaller, more traditional ruffles, which he applied in unconventional ways, in rings around loose trousers or on the seam of an oversize, collared shirt.

This focus on shapes all brought considerable depth to the lineup. It was already rich with textures, including patterns outlined in sequins, or a pale sherbet green raffia-like material he used to make a skirt, with extra volume-building folds in the front. But the parade of broad pleats, endless folds and extra gatherings that transformed dresses, suits and flowing trouser combinations showed the stronger character of the Wijnants woman. Wijnants has been expanding at a fast clip, adding men’s and new shoes and more accessories, but this was a different kind of extension — one of range. And proof that a little bubble wrap can take you a long way.