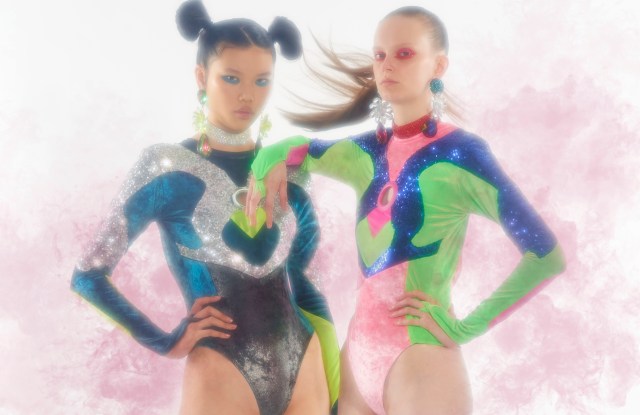 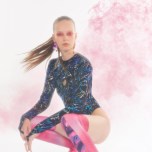 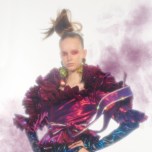 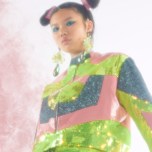 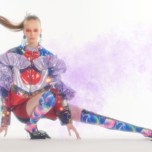 After being a finalist at this year’s LVMH Prize, Kevin Germanier decided he would throw caution to the wind and go full throttle with his colorful, dazzling, upcycled universe. “The competition and meeting so many people made me more daring,” he explained during his presentation. “For example, Maria Grazia Chiuri, whose aesthetic of sustainability is the opposite of mine, told me to go for it. To hear this from people I look up to made me more comfortable. I told myself to stop being so Swiss and just go for it.”

So his spring collection was a maximalist lineup of party-ready dresses and show-stopping separates. “Paris is the end on the calendar, where everyone is tired, so it needs to stand out,” he said.

He referenced Sailor Moon, the Nineties Japanese manga character about which he wrote his thesis at Central Saint Martins. “She was groundbreaking in Japan because she was the first female figure who was the hero of her story, without a male character,” he said. Her transformations informed the shape of colorful dresses that burst out with ruffles or wrapped the body in ribbons. Even her many on-screen battles came in the form of large grommets dripping silver to approximate her never-fatal battle wounds.

But he also kept reality, showing how some looks could be toned down such as a patchwork jacket, presented in metallic leather with sequins but which will also be available in a more muted denim-sequin combination. He also added fully fashioned knits and jersey pieces. “I tried to be more versatile, designing pieces that can be layered rather than as created as single looks,” he said, naming this as another takeaway from the competition.

Renewal is central to his repertoire though. A dazzling midriff-baring minidress had grown out of an unfinished Swarovski-decked name patch. “It doesn’t make sense to develop something and not use it, therefore creating waste,” he said.

While the source of his material makes for great conversation starters — black sequin fabric originally ordered as wedding tablecloths, hairclips used to create headbands and corsages recuperated from an unsuccessful importer — what remained emphatically clear was his desire to provide a sustainable wardrobe that exudes fun and light-heartedness.