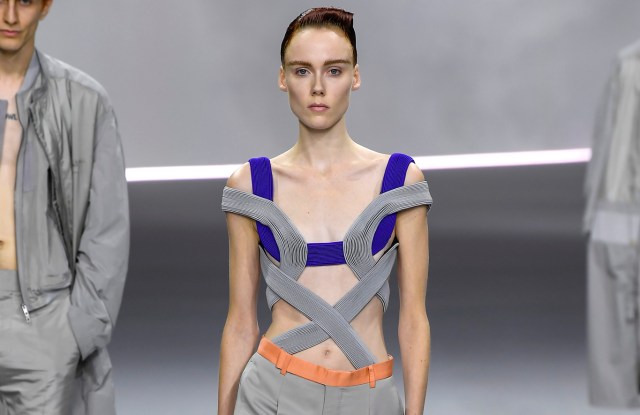 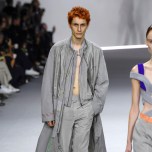 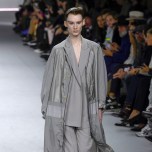 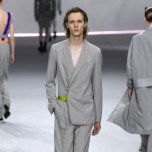 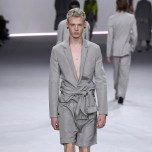 “Due to the small size of the venue” #notinvited, herded in and out, the seating pecking order, small talk, expressionless models, ego inflated, deflated and back again, and on and on it goes. Fashion weeks can be dehumanizing, which is why the humanity of Haider Ackermann’s runway was striking. Gender is beside the point, everyone is included. Even the spectators!

Models emerged out of shadows and smoke like real people taking an evening stroll. Some were grouped in twos or threes like old friends. Instead of staring blankly, they scanned around and looked at the crowd, as if saying with their eyes, “I see you.”

It’s the ability to forge this kind of emotional connection that makes Ackermann a rare talent. Not just smoke and mirrors, the collection also connected — on several levels.

“I wanted something more absent. I wanted the clothes to disappear in the background,” he mused backstage. “It doesn’t do justice to my clothes, I know, but I’m just trying to work in a mood. I felt everything is so loud I wanted this quietness, peacefulness.”

If that sounds like the set up for stoic minimalism, think again. Ackermann brought plenty of creative energy and color to the runway, using inspirations from East and West, Madame Grès pleating, kimonos, pajama dressing, utilitywear and more.

He played a lot with negative space, as on a black tailored backless jumpsuit with cutouts at the waist that had rock-star appeal, and the purple and gray plissé bodysuit crisscrossing bare torso and shoulders like a harness, worn with gray pants whose vivid orange waistband offered a hint of athleticism. The plissé technique got a more glamorous treatment on a black gown worn by Bella Hadid, which was more red-carpet va-va-voom than I can ever recall seeing from the designer.

A gray utility jumpsuit came folded down with the sleeves tied at the waist, and worn with a sculpted chartreuse silk jacket. This spoke to the informal ease that carried through much of the rest of the collection, including tuxedo pants with colorful stripes paired with a tank top, or a black long sleeve T-shirt, cinched with a belt, that morphed into the bottom half of a lavender tuxedo jacket for a cool look.

Ackermann’s exploration of the East came to play in a royal blue pajama jacket over louche and lovely green velvet track pants and slippers, on obi-belted shorts; leather pants with jacquard insets, and the last look of a pale gold asymmetrical kimono jacket cinched over shorts.

Less an all-or-nothing proposition than some of his past collections, it felt commercial, accessible and chock full of ideas executed with a calm, steady confidence.