Christelle Kocher let her sensual instincts take the upper hand in her show, held in the library of the Centre Pompidou museum. 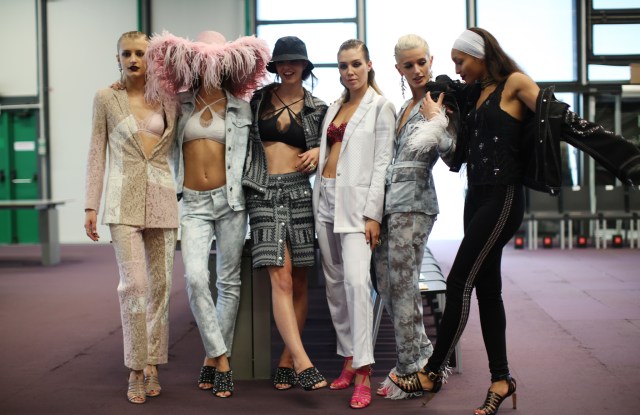 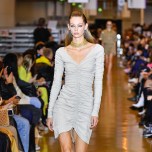 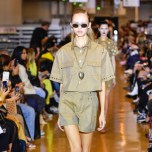 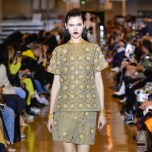 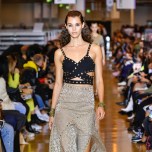 In what is fast shaping up as a season of political statements, Christelle Kocher turned her spring show into a celebration of literacy, showing her Koché collection in the BPI library at the Centre Pompidou museum in Paris. Guests taking their place amid rows of gray metallic bookshelves found vintage booklets on different topics on their seats. The primers, from the encyclopedic “Que sais-je?” series familiar to anyone who has studied in France, carried titles such as “Darwin and Darwinism,” “Continental Drift” and “Hydraulics.”

“It was important to me to put knowledge at the heart of my show, given the speed of everything today with social networks,” Kocher explained backstage. “I’ve spent a lot of time in this place, and it’s been a great source of education and open-mindedness.”

The designer may enjoy hunkering down with tomes on everything from philosophy to pottery, but her girl is no bookworm. Kocher’s aesthetic lies somewhere between the sports track and the boudoir, and her sensual side had the upper hand this season — with a new strain of hard-edged romanticism. It was evident in the eyelets that studded everything from a khaki cotton raincoat covered in cutout petals and wooden beads; sexy crossover bra tops; fluttery bias-cut asymmetric skirts, and a cropped, oversize white cotton shirt.

Even the athletic looks served some sly seduction: a graphic patchwork track suit slipped off one shoulder to expose a lacy bra. (You know what they say about judging a book by its cover.) But the standouts were the looks that deftly combined the two, like the white soccer jersey dress with lace inserts and a flirty ostrich feather hem.

Kocher, who doubles as artistic director of Chanel-owned featherer Lemarié, said she was inspired by great Paris couturiers like Madeleine Vionnet, Jacques Fath and Yves Saint Laurent. That came through in her use of ruching and clean lines, like the little black dress with a draped back exposing a single shoulder. She also knows when to pull out the stops: witness her flapper dress made from recycled football jerseys embroidered with 2,500 flowers linked with small chains, exploding into an electric blue-and-black ostrich feather skirt.

Models took their bow brandishing books with varying degrees of familiarity — some casually flipped the pages; others held theirs at arm’s length, in awkward show-and-tell mode, and a couple simply used them as fans. “There might be some book-swapping at the end,” Kocher predicted. “Physical chemistry,” anyone?