For her sophomore outing, Louise Trotter magnified house codes and collaborated with female artists on sneakers and jewelry. 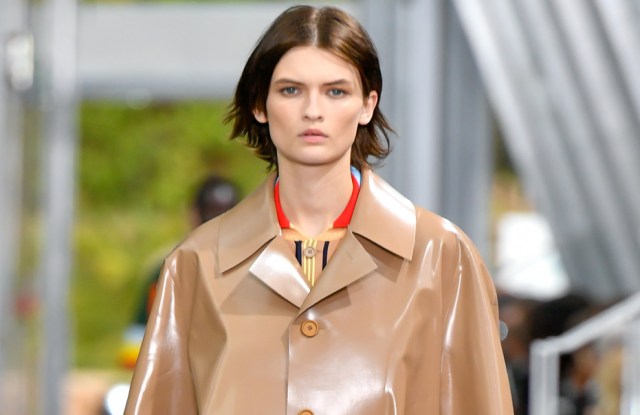 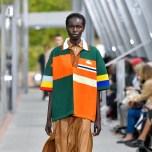 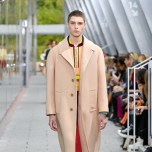 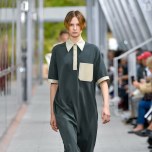 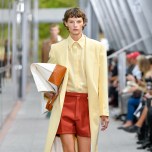 “The players are ready. Position,” and with that, the second Lacoste collection by Louise Trotter hit the runway, corridors around Roland-Garros’ brand-new Simonne Mathieu court, an ultra-modern installation nestled in the greenery of the Serres d’Auteuil botanical gardens. But the venue, where the brand had surprisingly never shown despite historic links with the sporting complex, wasn’t the only opposing pair offered by the tennis-centric brand this season.

For this iteration, the incumbent designer explored what she called the brand’s “aristocratic yet quite street” identity. “I wanted to try and address the nostalgia people feel toward Lacoste, with a contemporary lens,” she said backstage. Sporty pieces were cut from butter-soft leathers or silks. On others, Trotter demonstrated her deft tailoring hand, cutting a double-breasted suit in soft pink. Shown in succession on a female and then male models, it reinforced the idea that very little, if any, of the lineup was gender-specific — not even floor-skimming polo shirts and skirts that nodded to the Japanese hakama in their pleating and proportions.

To ground her work in the here-and-now, she tweaked proportions on house signatures. Mercerised or heavier yarns were used to produce oversize piqué. Widened cuffs and ribbing details were given pride of place. Collars were wide and necklines were deep; the fit was relaxed but never baggy. Here and there, cast brass crocodile pendants — the work of Rosh Mahtani, who designs London-based jewelry label Alighieri — turned the brand emblem into a precious piece. This gave the lineup an Eighties mien, reinforced by the color palette that swung between sophisticated takes on bold hues and tweaked neutrals.

Footwear choices alternated between a preppy moccasin and sneakers revisited by Helen Kirkum, a self-described “sneaker collagist” Trotter has been following since the footwear designer’s 2016 graduation from London’s Royal College of Art. “I gave her sneakers I didn’t use for the last collection and asked her to remake them into something totally different,” the Lacoste designer said.

As fashion inches back toward a dressier take of the sportswear vibe, Trotter’s work might just be well-positioned to give Lacoste advantage.