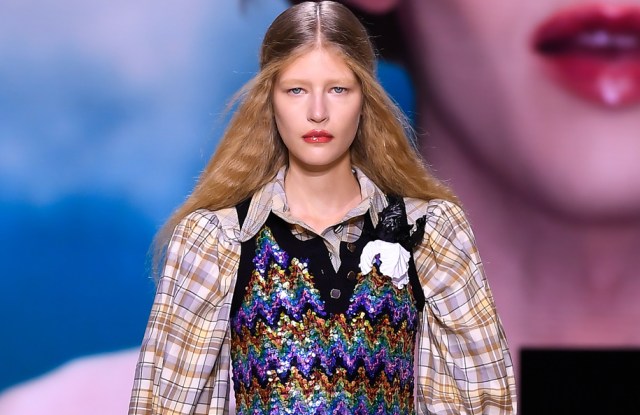 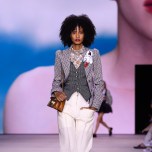 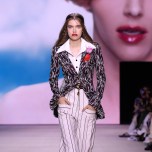 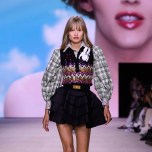 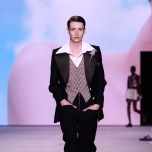 Closing Paris Fashion Week can be a double-edged sword. In theory, the Louis Vuitton show is the star-studded, spectacular apotheosis to a month of runway shows in four capitals. In practice, weary fashion editors are anxiously eyeing the clock to gauge if they will make their plane or train back home.

It didn’t help that the Vuitton show this season started an hour later than usual, just after the sun set on the plastic tent erected in the courtyard of the Louvre. The brand wanted to maximize the impact of the music video that played on a giant screen that stretched the entire width of the catwalk.

Looming over the audience was transgender singer Sophie Xeon, known simply as Sophie, performing an extended version of her 2017 track “It’s Okay to Cry.” Somewhat surreally, models emerged from a door set in the middle of the performer’s chest.

Nicolas Ghesquière has been flirting with gender fluidity for several seasons, having cast androgynous models including Krow Kian in his spring show a year ago, and subsequently tapped transgender actress Indya Moore to star in his pre-fall look book and act as Instagram “host” for Vuitton’s fall show.

And it was an undercurrent this season at the Paris shows, where Celine’s Hedi Slimane put women in jeans-and-blazer combos that were virtually identical to the men’s outfits he showed in June, while Casey Cadwallader at Mugler promoted an inclusive vision of sexuality rooted in the drag scene.

Ghesquière opened with mismatched suits pairing shrunken jackets with wide-legged pants — think a dandified “Annie Hall.” The designer, who skipped the usual post-show Q&A with the press, said in a statement he was inspired by the Belle Époque and the Vuitton family home, a prime example of Art Nouveau design.

“It was a time of excitement and tremendous change. It’s about revisiting all that,” he explained. “It was an exponential moment for the house, which then began to travel the world.”

He anchored the collection in the late Sixties and early Seventies, when William Morris patterns and Alphonse Mucha prints were once again all the rage. Skimming over that era’s bohemians and glam rockers, Ghesquière focused on its psychedelic patterns, which he placed, collage-style, on belted or A-line tunics with bell sleeves.

It’s a territory more commonly associated with Miuccia Prada or Anna Sui, but Ghesquière had his own distinctive take on the aesthetic, using graphic white patch pockets to give patterned wrap minis a cool contemporary edge. Mostly, however, this season found him more retro than futuristic.

His dollybird dresses with white bibs could have stepped straight out of “Once Upon a Time in Hollywood,” Quentin Tarantino’s love letter to Hollywood in the Sixties. And the finale of billowing white blouses had all the theatrical flair of Sarah Bernhardt, the French actress who personified Belle Époque style.

Ghesquière has accustomed his audience to stylistic about-turns: bourgeois propriety one season, sci-fi futurism the next. He’s fond of anachronisms, too: this time, they included a rectangular bag shaped like a VHS tape, and tote bags printed with adhesive labels for imaginary videos.

Capping a season that has seen the comeback of minimalism, his trippy adventure unsettled and intrigued. As Ghesquière took his bow, celebrity guests including Catherine Deneuve, Alicia Vikander and Chloë Grace Moretz rose in a standing ovation — consider minds blown.

WATCH: The NYFW Spring 2020 Trends You Need to Know