French and flirty, in the designer's description, the collection proved he is not neglecting his namesake label. 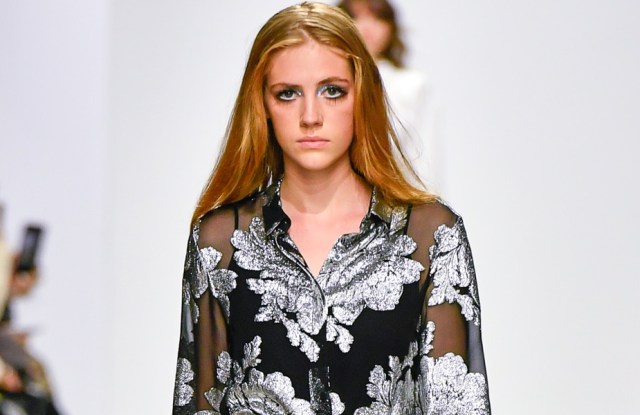 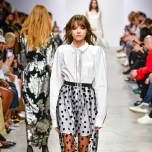 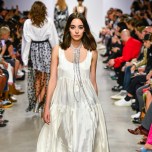 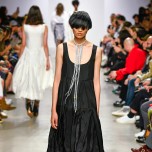 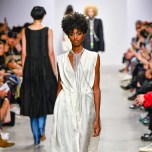 Lest anyone worry that Lutz Huelle, the label, would languish as Huelle, the designer, gets swept up in his new mission at Delpozo, here came a message, striding down the runway: fear not.

A bit saucy and rather fashion-savvy — with an alternative Eighties vibe — the Lutz woman threw off her jeans last season and, swapping them for long skirts with a puff and shiny pencil trousers, declared it was time to dress properly. And enjoy it.

For spring, she carried on in this manner, slipping on an evening gown, in a flowy, black and metallic jacquard splashed with a generously proportioned floral pattern.

“In a way it’s kind of a French, flirty way of dressing — but it’s still what I like,” said Huelle.

He turned his focus on transparency, using an ultralight black mesh, often with polkadots, layering it over short, puffy sleeves, making them larger, or longer, and in one case, adding a chic touch to a light blue cotton shirtdress. Other times the layering felt a bit haphazard — those polka-dotted legs shooting out from under a thick trenchcoat were surprising in a slightly jarring sense —  likely his intention.

Known for his obsession with bombers and jean jackets — which he remakes entirely — for spring, he crafted an attractive and rather dressy version, cutting out the neck of a white jean jacket and replacing it with a sheen of the black see-through mesh, gently gathered and trimmed with a line of tight ruffles.

Bell-shaped shoulders were back, puffing off the shoulders of a short, checked shirtdress and a tan trenchcoat-dress, chic daywear meant to cross over into the evening.

In the extra-fancy range, a short cape-dress with a golden, satin shine held perfect proportions, thanks in part to the subtle, criss-crossing pleats —  ideal for that moment when someone is rocketing to stardom.