Gray and drizzly skies made for a moody backdrop to the designer's climate-themed, end-of-days collection. 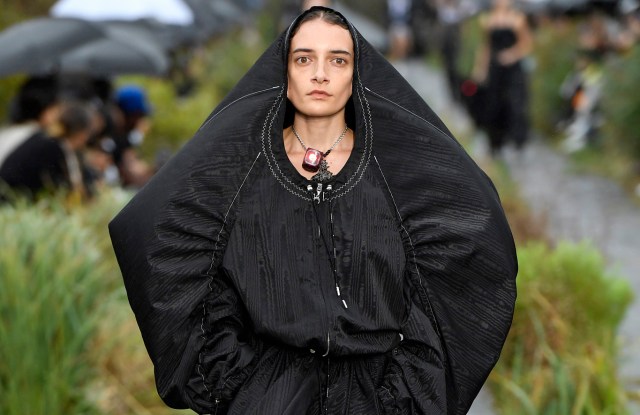 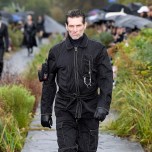 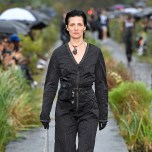 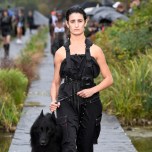 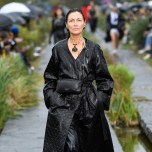 If you’re going to do a wasteland theme, might as well get the weather right. Marine Serre’s invitation for her spring show, titled “Marée Noire,” came with a black umbrella, which proved the perfect accessory for her outdoor show, staged under gray and drizzly skies at the Hippodrome d’Auteuil on the outskirts of Paris.

“It’s really playing with the global warming situation of the world today. ‘Black Tide,’ or ‘Marée Noire,’ is to be interpreted really freely also, because of course in French it means ‘oil spill,’ but the idea is really more to see it as a general wave, a kind of black zone in which we are in,” Serre explained before the show.

Coming in the midst of the Global Climate Strike, the display tackled its environmental theme on several fronts. Known for her upcycled designs, Serre said half the looks in the show used recycled materials — including the black PVC trenchcoats made from plastic bottles recovered from the ocean.

Black leather and faded denim outfits, all embossed with her signature crescent motif, were made from deadstock, while curtains, bed sheets, old nightgowns, crochet tablecloths and knitted shawls were assembled into patchwork dresses in creamy Earth Mother tones.

Despite her serious intent, Serre appeared in a more playful mood this season, sorting her survivors into distinct tribes. Here, a teenager in a denim jacket and miniskirt combo, clutching a Pomeranian, who could have stepped straight from the set of “Clueless.” There, a bourgeoise keeping up appearances in a chic black skirt suit made of discarded bath towels, her red nails grown long from neglect.

“The joke is that to keep on working during global warming, at least you have your towel all the time, if you want to sponge yourself,” Serre said with a wry smile.

The LVMH Prize winner recently moved into new headquarters spanning 8,600 square feet in a “Made in Paris” complex in the north of Paris sponsored by the city, where she now has ample room to weed through piles of recycled materials to find the best-quality scraps — because at the end of the day, she still has a product to sell.

“We just try to stay calm with the growth, take it easy and do it step-by-step. For me, the most important is that the garments look good in the end,” she said.