Rushemy Botter and Lisi Herrebrugh conjured a tropical rainstorm with their aquatic show set at the Palais de Tokyo. 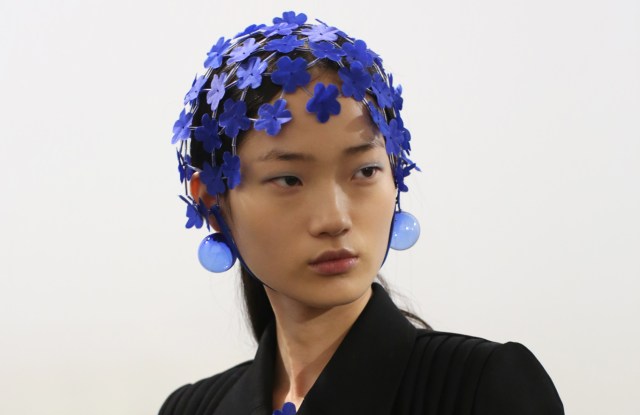 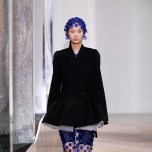 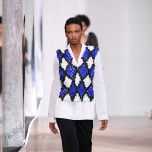 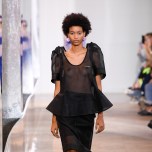 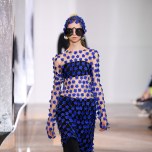 The umbrella has proved to be the accessory of the season at Paris Fashion Week, awash in outdoor displays that left the audience more than a little damp. Rushemy Botter and Lisi Herrebrugh held their second show for Nina Ricci at the Palais de Tokyo, but decided to bring the rain indoors.

A curtain of water dropped down the middle of the runway, sending a light mist wafting toward the audience. Meant to evoke a tropical rainstorm, it was an atmospheric backdrop for a lineup that delved into the designers’ Caribbean and Dutch heritage with a signature mix of loose tailoring and skillful flou techniques.

The duo, who also design the men’s wear label Botter, are clearly passionate about construction, opening the show with a white blouse and skirt that were as plain as a toile. Botter said they were particularly inspired by a pin-tucking method they found in the Ricci archives.

“The last time we had oversize suits, and we thought it would be beautiful to take this volume into a more feminine silhouette,” he explained. “We wanted to push the boundaries of the techniques, but to still make it look easy and fun.”

The curtain pleats gently took in the waist of a black jacket, and gave sculptural form to a gauzy lilac-and-pink-striped shirtdress. A sleeveless dress in a blurry floral print was gathered into a pleated front panel that rose in a stiff waterfall to graze the chin, while a nude organza top undulated over crisp matching pants.

There were quirky touches, like fishnet tunics dotted with bathing-cap flowers; hats and bags shaped like sand buckets, and a blush mille feuille dress inspired by a woman carrying a pile of hats for sale on the beach. “It was important to show the Caribbean part from a different side, and not the obvious one,” Botter said.

Island life runs deep in the DNA of their men’s wear brand, but Nina Ricci has always been a quintessentially Parisian brand. Botter and Herrebrugh have nailed the romance part — now they just need to take their Ricci girl for a little city stroll.