Though Virgil Abloh was physically absent for health reasons, his fingerprints were all over this conceptual collection. 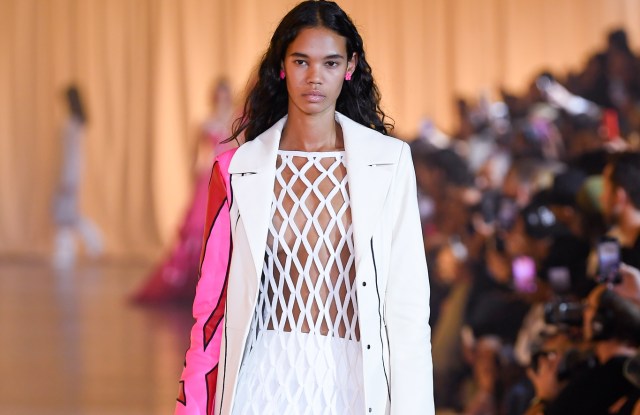 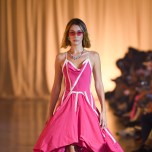 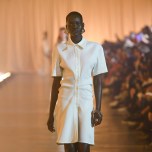 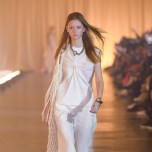 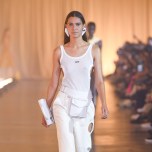 An Off-White show without Virgil Abloh is a bit like Coca-Cola without the bubbles, or so you tell yourself — and then Naomi Campbell sweeps into the room.

Still, even with the model’s presence, it would be disingenuous to pretend it was business as usual at the label, whose founder is on temporary sabbatical due to health concerns. The man himself is undoubtedly a huge draw, inspiring a near-messianic following.

But even if he wasn’t physically present, his fingerprints were all over the show. First, the setting: the Centre Pompidou museum, which seemed apt, since Abloh’s “Figures of Speech” retrospective at the Museum of Contemporary Art in Chicago is due to close this weekend after doubling the institution’s summer attendance figures.

Second, the show notes. Absent Abloh delivering one of his expansive speeches backstage, they served as a suitably arcane guide to the collection. “The fundamental concept is to illustrate a woman’s power. To show that her spirit is indestructible by natural forces. She can withstand a ‘meteor shower’ both metaphorically and physically speaking,” he said in a statement.

In practice, the show marked a return to the architect-turned-designer’s conceptual roots, after an extended flirtation with sportswear, via his multiseason collaboration with Nike. It opened with a voiceover by Mae Jemison, who became the first black woman to travel in space when she served as a mission specialist aboard the Space Shuttle Endeavour.

Abloh designs for the young women in his orbit, offering a take on women’s empowerment grounded in streetwear and urban culture. As such, branding becomes a tool for self-expression.

This season, he augmented his signature markers — ironic quotation marks, the arrow cross logo — with random holes, which appeared on everything from tank tops to leather pants, as well as the latest iteration of the brand’s Jitney handbag.

In fact, the bag was so riddled with perforations, it was technically a “non-functioning object,” the show notes explained. According to Abloh, the holes were a “graphic rendering of craters formed by falling rock.” They looked a hell of a lot like Swiss cheese — which turned out to be the more plausible explanation.

“The hole motif also serves as an ironic homage to Abloh’s alma mater, the University of Wisconsin. In the state, athletics fans wear ‘cheesehead’ hats and helmets, as Wisconsin is historically known for its dairy products. The hats are a common, if eccentric, sight at sporting events,” the show notes explained.

Cheesehead or not, the holes provided a graphic counterpoint to the minimal silhouettes, grounded in workwear and diving gear, sported by a multigenerational cast. Wide pants came with little drawstrings over the heel, while stretchy athletic fabrics contrasted with the billowing volumes of parachute silk.

Ramping up its artistic credentials, the show featured a collaboration with French industrial designers Ronan and Erwan Bouroullec. Their linear prints, resembling computer-generated scrawls, were applied to a silky shirt, baggy pants, a T-shirt and a glossy rain slicker.

Abloh capped off the display with a duo of pink dresses, worn by sisters Gigi and Bella Hadid, drenching the finale in a spectrum of colored light: food for thought until he’s ready to resume his position at the center of the fashion galaxy.