For spring, the couturier celebrated his 20th anniversary with a show, while summer expanded on unconstrained cotton silhouettes.

IsSixWeeksAfterFashionWeek = false
By Mimosa Spencer and Lily Templeton on October 6, 2019 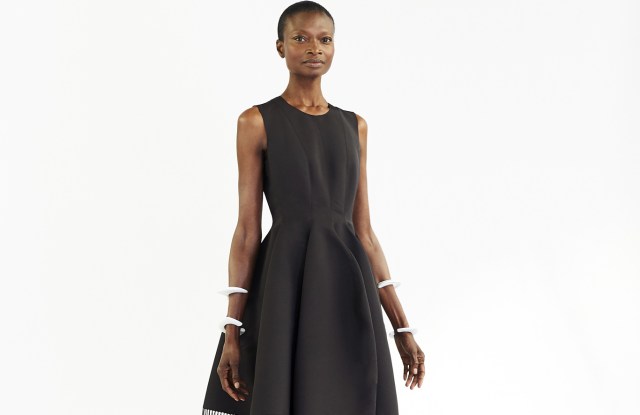 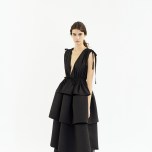 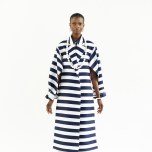 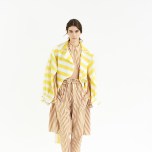 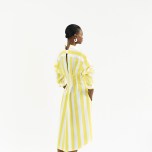 “The whole Maison Rabih Kayrouz universe is presented once during the July show, and then sold in three stages: ‘Acte 1’ during couture, and the second part is sold now, for two ready-to-wear deliveries,” said the Paris-based couturier at a presentation for “Acte 2,” the summer delivery of his spring/summer 2020 collection, explaining that this also fit a commercial logic for the brand.

In this second rtw, he concentrated on giving his client ease of movement, and “lightness by all means” befitting the warmest summer days. Crisp white cotton was cut in generous shirt dresses that could be worn belted or not; tiered dresses were adorned with openwork details that nodded to a couture bridal look, or blouses decked in gold buttons — a nod to his buttons but also to Bedouin garments.

Expanding on the stripe theme, he reprised easy shapes in silk charmeuse or in stripes of primary colors. Construction remained simple, with garments based on simple shapes of T-shirts that grew into dresses, shirts with a pin-tucked ruffle outlining the shoulders or even rectangles of fabric that echoed Grecian garments. Complexity came in touches like a vertical off-center cut hidden within a fold gave voluminous dresses movement, or floor-skimming skirts had front tab closures to facilitate dressing. “The first gesture is to wrap the body in a piece of cloth, then add a tie to adjust,” he explained, pulling on self-tie ribbons to transform a loose tunic into a sculptural top. — Lily Templeton

The mood was celebratory — this was an anniversary show: Rabih Kayrouz has been a couture designer for 20 years and a Paris couturier for 10, as he noted in a manifesto, printed in black ink and handed to arriving guests.

The perfect occasion to strut his stuff, which he did, showing sensual silhouettes for sun-blessed moments, fluid ochre suits, ample trousers, billowing shirt sleeves that trailed behind like scarves, shots of stripes, and dresses — many of them. His signature tent shape — close to the neck, and with boyish sleeves — came in red and white stripes or with a vibrant, yellow sun print. Airy numbers came in the same print, long and flowing, gathered simply at the waist.

Kayrouz charged his teams with an usual task: make a couture piece without using fabric.

“They told me ‘We want a challenge, give us something difficult,’ and we came out with those ideas,” he said, after the show. Using simply strips of ribbons, which were woven together in mesh-like, graphic forms, the house teams pieced together elaborate dresses, some ruffled, some long and body-hugging — fitting the house tradition of playing with constructions and rectangular patterns.

Running through the show was an undercurrent of Mediterranean warmth — well, heat — the show was held in a greenhouse, as one guest pointed out. It gradually built up — with Blanca Li twirling down the runway — reaching a fever pitch at the end, and erupting into a dance show. It felt like a celebration of women, and all ages were represented, with more than one head of vigorous gray hair sailing down the runway, which he famously stacks with friends. The youngest was Ayla, a very determined-looking four-year-old with bouncy curls. — Mimosa Spencer

To see the full collection, click the photo below.