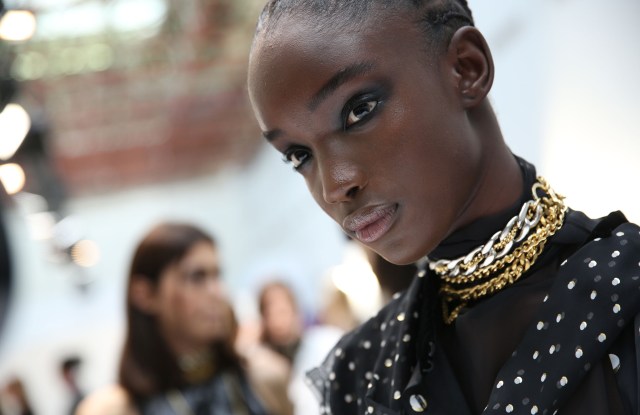 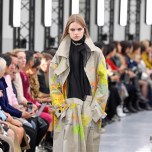 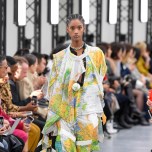 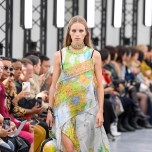 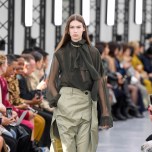 Many of the streets in central Paris came to a standstill Monday morning as Russian President Vladimir Putin, former U.S. president Bill Clinton, German President Frank-Walter Steinmeier and other world leaders put their differences aside for a few hours to attend the funeral of former French President Jacques Chirac.

The Champs-Élysées emptied, and Avenue Winston Churchill quiet as church on Sunday, made for a fitting entry to the Sacai show, where designer Chitose Abe’s theme was harmony, starting with the great harmonizer himself, George Clinton, getting funkadelic in the front row next to Naomi Campbell.

Though Clinton has been making music for the better part of half a century, Chitose only recently became a fan, she said backstage. She dialed him up to see about a partnership, and “he was all on board,” lending artwork from his band Funkadelic’s “One Nation, Under a Groove” album for runway T-shirts.

Although some designer really should, Abe didn’t seem to take much inspiration from Clinton’s own wacky wardrobe over the years. (Check the captain’s hat with crystal-studded ski mask he was sporting at the show with his fresh unboxed Sacai Nike kicks.) Instead, she used his music to inspire her signature hybrid pieces, remixing oversize suiting, baggy pants, blazers, scarfy chiffon blouses and trenchcoats — sometimes all in onesie.

A few of the results were so funky (couldn’t help it) it was hard to tell what one was looking at — or how to get it on and off. But a camel ribbed knit sweater dress that hugged the body on one side then spilled into a scarfy green chiffon dress on the other was carefully controlled and cool, as was a new-look tuxedo involving navy blue baggy tuxedo trousers with gray side stripe spilling over chunky sandals, worn with a sleeveless, pleated back tunic with a blazer’s pocket flaps. Dotted foulard dresses were also of the moment, as were the chopped up and put back together black and white tweed suits.

A map of the world motif extended the show theme, appearing as an allover print on several looks, and as subtle 3-D fabric fringe bursting from the hip of a skirt like from a paper shredder in the West Wing. It’s hard to imagine feeling rah rah enough to want to wrap oneself in all of it, though. (When asked backstage if it was meant as a comment on climate change, the designer said not really.) The soft, squishy globe-shaped map-print leather bags seemed more apropos to the times — part stress ball, part punching bag.