Using techniques of deconstruction, reconstruction and patchwork, the collection set out to rewrite the narrative of American sportswear. 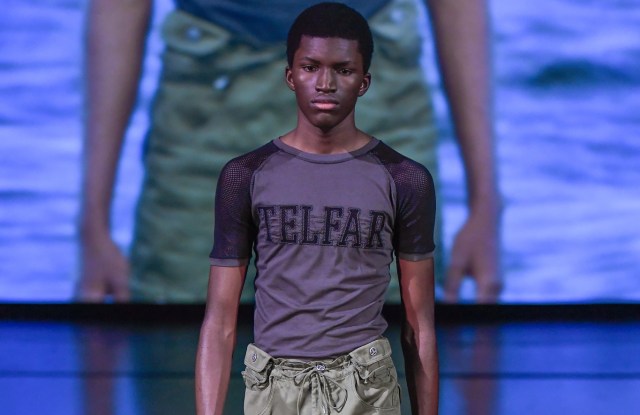 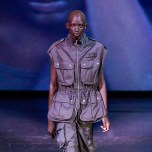 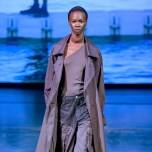 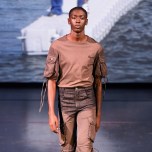 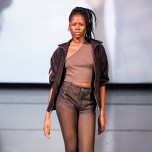 There’s a new American in Paris.

New York designer Telfar Clemens kicked off Paris Fashion Week with a multimedia happening that was, appropriately enough, a musing on migration. Not one to do a straight runway show, he presented his coed collection at La Cigale concert hall with a film, a live sonic score by Afro-Parisian DJ Crystallmess, a musical performance by Lancey Foux, and the surprise reveal of a Converse collab (including uber-cool sneaker sandals for men and women) that should help catapult the brand to an even wider audience.

Projected behind models wearing the same outfits that were shown on-screen, the film “The World Isn’t Everything” was the work of Clemens’ buzzy group of creative collaborators, including “Slave Play” playwright Jeremy O. Harris, artists Petra Collins and Juliana Huxtable. Speaking to the idea of migration, borders and belonging, the work featured black men floating on rafts just out of reach of the New York skyline, and “Moonlight” actor Ashton Sanders being interrogated at an airport security checkpoint, among other scenes, all with characters wearing Telfar logo jewelry, T-shirts and bags.

On the runway, the collection set out to rewrite the narrative of American sportswear. Techniques of deconstruction, reconstruction and patchwork were used to reinforce the message that the brand is aiming to be more democratic — in race, gender, sexual orientation and economic background — than your father’s logo sportswear brand.

Clemens opened with a section of utility pieces, some made from splicing together multiple materials, as on a cool pair of hybrid jean-canvas cargo shorts worn with a canvas trench, or a T-shirt with sleeves made from the shorts legs of cargo pants, worn with hybrid jeans-cargo pants ending in drawstring ankles.

Flared pant legs were replaced by fishnet or leather for a moto-chaps vibe, worn with the designer’s signature asymmetric tank tops cut in three lengths, or with shirts made from collaging together T-shirt, button-downs and knit fabric.

He played with preppy knits, showing his backward polo shirt with high-waist khakis, alongside Afro-Jamaican stripe crochet sweaters. Clemens remixed athleticwear, as on Seventies side-stripe dolphin shorts that were twisted into thigh-hole track pants, and used upcycled T-shirt jersey to make hybrid boxer short-khaki pants that riffed on hip-hop sagging. T-shirts featuring looks from the Telfar 2019 “Country” collection were a clever way to build heritage into the burgeoning brand, which has already won the handbag game with its logo shopping bag totes, updated this season in a flag print.

It was his most commercial collection yet, balancing edgy pieces (that Budweiser-print shirt) with future classics. But it’s Clemens’ capacity for storytelling that could make him a new international star.

Himself a first-generation Liberian American, the designer showed what American style, with its military, denim, Afro-Jamaican, preppy and hip-hop codes, already owes to migration. He also showed what it might look like if it were defined not by the Ralph Laurens and Tommy Hilfigers of the world, but by someone like him — or the next person trying to make it to the New York skyline.