The designer filtered the pageantry of 18th-century dress through the lens of East Coast prep. 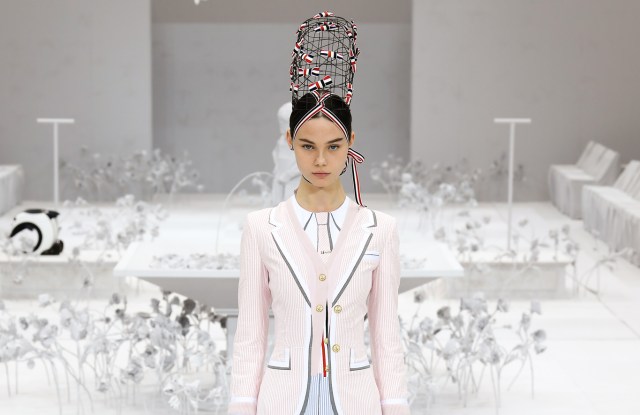 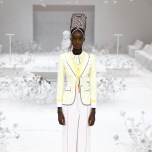 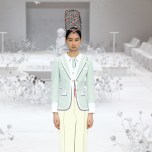 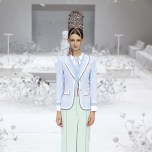 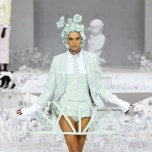 It was a garden of seersucker delights with a striped runway, flowers and birds and a tinkling (teehee) cherub fountain. Models were installed as statuary, their feet trapped in dolphin-shaped shoe pedestals so harrowing, one poor girl had to call it quits early. What purpose did they serve other than once again to bring up the persistent question of why anyone would want to watch a woman suffer as part of a fashion show in 2019? It was a distraction from an otherwise kinder, gentler Thom Browne collection, set to a soundtrack that careened from classical to punk rock to “Teletubbies!”

Browne revels in silliness, but his couture-like chops are dead serious. It was historical garments at the Met (Browne’s partner is Costume Institute curator Andrew Bolton) that got him thinking about filtering the pageantry of 18th-century dress through the lens of East Coast prep, and exaggerating the female form using one of the silliest garments in all of fashion history, the side-hooped pannier skirt.

The Met’s “Camp: Notes on Fashion” exhibition that closed earlier this month included lots of items relating to the French court of Louis XIV, where the pannier flourished during the Sun King’s final years, and where Bolton argued the term “camp” originated. The influence of that exhibition could explain some of the volume and grandeur we’ve seen on the runways here this week — infantas at Rick Owens, operatic extravagance at Comme des Garçons, ballgowns at Balenciaga — it all feels like nostalgia for the arch-formality that existed pre-French Revolution, and pre- jeans-and-T-shirts fast fashion revolution.

But back to Browne: One could analyze the psychology of a pannier, which by design makes a woman take up more physical space, like the fashion equivalent of manspreading (call it womanspreading). Browne didn’t dwell on that too much, he said during a preview. (Though maybe he should have!)

“Sometimes you look back at the history of clothing and ask why, but I almost took it at face value. I just wanted to play with it and not make it so historical,” he said.

So he cut loose a bit, challenging the formality of the pannier skirt and the 18th-century robe à la polonaise by rendering them in humble seersucker and madras plaids engineered into fanciful-looking organza tweeds. Similarly, he let his woman cut loose, in easier silhouettes — the pink seersucker tweed off-shoulder corset jacket roomy enough to wear a blouse underneath, for example; the robe à la polonaise with adjustable pulls to turn up the volume, and the tweed Chesterfield coat with easy pleats in back, over pleated tweed skirt spliced with red, white and blue silk for lightness (pannier optional).

A rebel spirit came through in a yellow floral-embroidered organza corset and skirt worn low on the hips exposing a yellow bloomers-clad bootie. (Would that be a bumster skirt?) Seersucker wrapped pannier cages worn atop classic tailored looks added a bit of “whoops, I forgot my pannier” whimsy, as the designer called it, and underscored a woman’s choice in the matter. (Might be a good option for staking out space on a crowded subway.)

There were plenty of Browne’s beloved tromp l’oeil creations, including the gasp of a finale, a taffeta seersucker dress big enough to hide the baby carriage underneath that proceeded it on the runway, with a decadent skirt of flowers and folds embroidered in gold bullion.

“I’d love for people to understand the work that goes into these pieces,” Browne said, noting one dress that took 60 hours to complete. Indeed. So maybe no dolphin pedestal shoes next time?