Repeating many of the brand’s past ideas and anti-capitalist statements, the show was held at the Champs-Élysées branch of McDonald's. 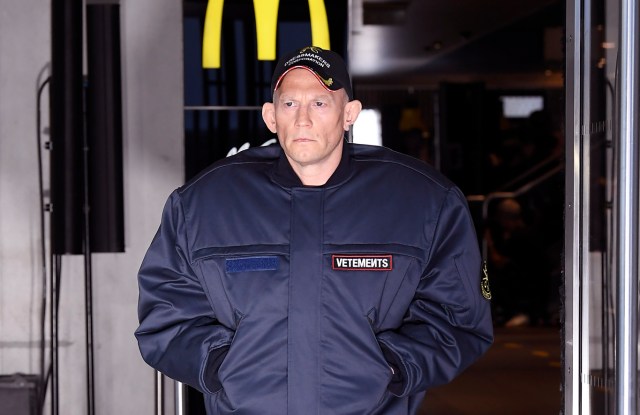 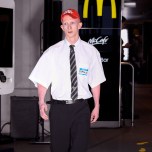 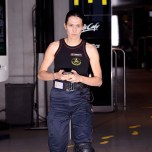 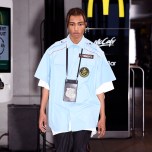 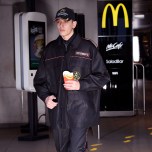 Fashion passed through the Golden Arches, with vegetarian designer Demna Gvasalia continuing his cynical observation of capitalist society at the Champs-Élysées branch of McDonald’s. The show notes — a list reading anatomic flip-flops, kapitalism, clothes 4 rent, and the like — were printed on napkins. Branded (courtesy of a marker pen) paper cups of Coca-Cola awaited guests, a bemused group of McDonald’s staffers taking it all in from behind the counters as the models followed a trail of yellow footprints around the store, some chomping on fries.

Repeating many of Gvasalia’s past ideas, the show, held in the heart of gilets jaunes territory, opened with a guy dressed in a navy riot squad uniform with gigantic shoulder pads, chunky protective boots and shin guards, throwing a fierce look from under the visor of a logo cap.

Out came the usual parade of house classics going from spins on corporate dressing to motorcycling-inspired gear, a fetish element of Gvasalia’s design universe here reworked as protective hybrid leather boot pants with color-blocked protective padding for women and a stonewashed denim jumpsuit for men.

Sprinkled in were the brand’s bread-and-butter signatures like tracksuit total looks, oversize and distressed suits and shirts, folkloric-looking, tacky flower prints for deconstructed dresses and kitchen tablecloth coats. Not to forget the reworked denim pants, here patchworked and resized in roomy, flared shapes and, of course, the infamous slogan hoodies. One was marked with “nobody, everybody, anybody, somebody,” spelling out the inclusive approach of the collection.

It was at times visually compelling, especially the models in smudged Halloween makeup, at times evoking a zombie Ronald McDonald, as if they’d walked straight out of an American teenage horror movie. Cases in point: the grungy-looking guy wearing an oversize tartan shirt over a striped long-sleeve T-shirt and stonewashed denim Bermuda shorts or a girl in a leopard-print stretch velvet dress with long flared sleeves.

But, mainly this running commentary on consumerist society — one told on new secondhand-looking clothes sprinkled with Vetements-ized spins on brand logos — felt déjà vu. Maybe for next time, it’s time to come up with some solutions?