Yohji Yamamoto delivered an ultrachic collection that was as controlled as it was poetic. 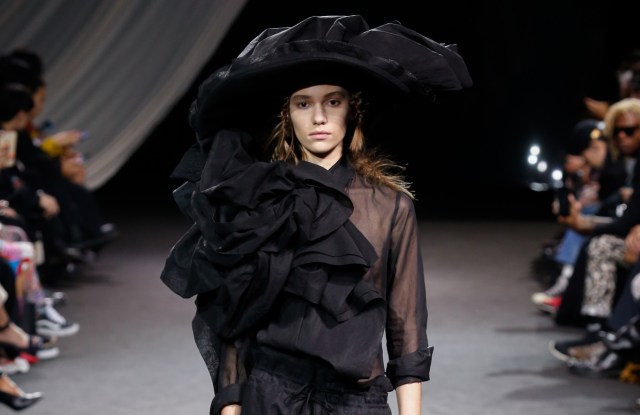 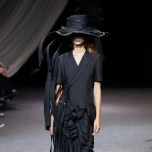 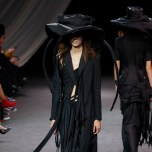 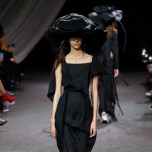 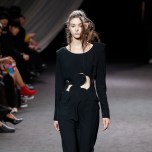 Climate change might be a bitch for the planet, but on Friday night, Yohji Yamamoto spun it to fabulous advantage. Backstage after the show, he spoke about having had the globe’s great scourge on his mind trough his design process.

Given the backstage bustle and the designer’s soft-spoken tone, the thought was difficult to track exactly. Asked how it manifested in the clothes, he pointed to the various geometric cutouts in a series of black dresses. A less-nuanced reading is that those dresses were just Yamamoto’s take on sexy.

But no matter. Even if the dystopian subplot didn’t register with clarity, the show’s poetry (another of Yamamoto’s descriptives) certainly did. The collection was exquisite, a study in inventive, cross-cultural chic.

Yamamoto opened with a sheer black shirt bedecked with a swirling appendage that looked like a huge, discombobulated rose. It was worn with a slim skirt under a huge picture hat. This led to an artfully rendered exploration of classic tailoring with which Yamamoto had his way. Looks with rippled, wired hems exaggerated tropes of an early 20th-century ladies’ wardrobes; sleeker versions with strong mismatched shoulders worked a futuristic Forties vibe. On the softer side, a rumpled white-and-light-beige assemblage put an undone spin on the goddess dress.

A haute feeling permeated the cuts and attitude, the latter Yohji-fied with trainers (he was there so long before the sneakers-with-everything trend) and humble fabrics. Yet humble has its limits. Lavishly embroidered skirts worn with tailored jackets and vests took your breath away.

Overall, the clothes featured plenty of the remarkable complications of cut and construction intrinsic to Yamamoto’s work. Yet here, he rendered them with heightened control and restraint, even by his standards. This worked brilliantly, making them more approachable without sacrificing their artful allure.