Anthony Vaccarello put the spotlight — literally — on what’s emerging as one of spring’s biggest trends, the shorts suit, and put his own spin on YSL's famed Seventies Russian collection and Le Smoking tuxedos. 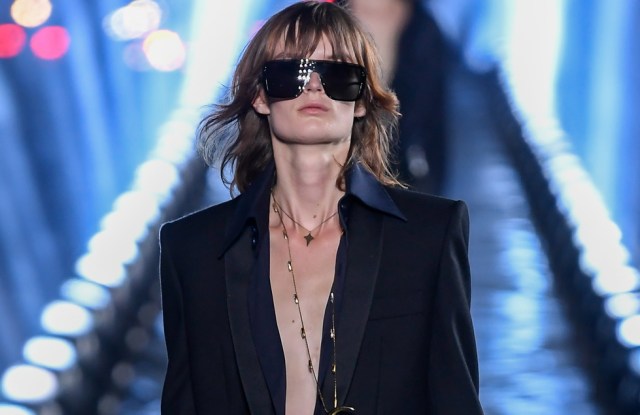 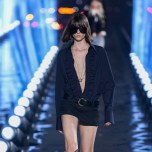 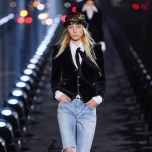 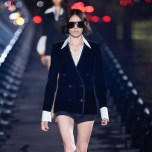 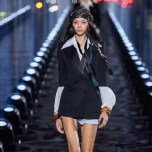 The new YSL female power suit is shorts. That according to creative director Anthony Vaccarello, who put the spotlight — literally — on what’s emerging as one of spring’s biggest trends, the shorts suit.

Meanwhile in Paris, the rain is proving to be quite the runway set piece, from the dystopian mist at Marine Serre, to the downpour at Saint Laurent that let up just in time for the spotlights to turn skyward, all 394 of them, for another one of Vaccarello’s light spectaculars to rival the Eiffel Tower’s twinkling behind it. (He really takes the whole City of Light thing seriously.)

On the runway, it all started with the legs. The spotlights’ skinny beams of light following models’ strides in knee-grazing boots made for the ultimate power moves. Opening looks were long, short and shorter shorts — HotPants short in some cases — in blue denim or black, worn with a ruffled navy blue shirt left unbuttoned to the navel; a banker’s gold button blue blazer with YSL embroidered on the pocket, or a cropped black velvet officer jacket with a strong shoulder (all subtle nods to nautical style, the designer said).

After the strong show of shorts, Vaccarello turned to Saint Laurent’s Russian collection for inspiration, hitting another of the season’s trends, the Seventies.

He resurrected the gilded head wraps (one could imagine the models wafting in on the scent of opium), and showed swashbuckling black velvet or gold Lurex pants tucked into tall boots, worn with sheer blouses and shrunken vests.

Vaccarello put his own spin on the master’s exotic dirndl skirts by adding a treasure chest’s worth of heavy gilded embroidery to them, and pairing the skirts with sexy tank tops for a look that was more modern sportif. Contrasting the softness of a liquid gold lamé skirt with the strength of a sculptural black bustier top also made for an appealing update. Likewise, burnout velvet embroidery peasant dresses looked luxe, for those who missed out on the Yves originals and Hedi’s versions, too.

As gorgeous as the workmanship was, this collection was about restating and recontextualizing classics — not earth-shattering, certainly, but brand-affirming.

For a finale, Vaccarello paid homage to another house favorite, Le Smoking, sending out versions of the classic in a thousand shades of black, done in leather, sequins, with jackets cropped, elongated, even a tailcoat.

Although Naomi Campbell wore a black sequin version, taking an icon’s sweet time navigating the wet runway and upturned spotlights in her cigarette pants and strappy heels, others wore their jackets with shorts, even fraying denim styles.

“That’s something everyone’s wearing, so why not show it?” Vaccarello said backstage. He’s right; it’s what all the kids are wearing. Yves would have loved it.