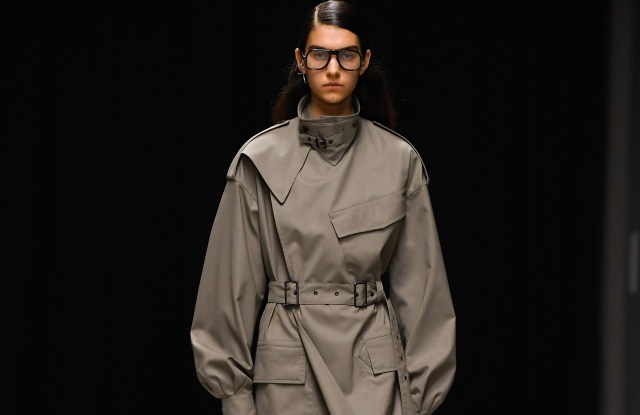 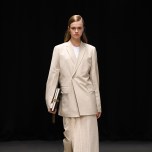 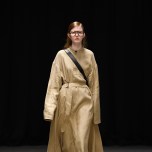 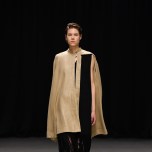 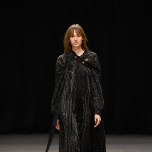 Yukiko Ode and Hideaki Yoshihara’s brand has, for the past several seasons, been a consistent bright spot during Tokyo Fashion Week, and the latest season was no exception. After a series of collections focused on reinventing classic military pieces from around the world, the spring offering had a softer, more feminine feel to it, but was no less timeless.

Hyke is not a brand that capitalizes on sex appeal. There is very little skin shown with its clothes, even for spring. And yet they have a refined elegance that is undeniable. Ankle-length trenchcoats, maxidresses layered over fringed skirts, and pantsuits topped with pleated half skirts were turned out in neutral khaki, beige, navy and black, with a few pops of blue and pink candy colors thrown in to mix things up. The fabrics were stunning without exception, from smooth cotton and soft linen to functional tech materials.

Having collaborated with sports brands including The North Face in the past, this season saw a grouping of pieces made in conjunction with Adidas. Pleated, asymmetrical dresses, yoga-ready leggings, and abstract printed black-and-white pullovers were often paired with more tailored items, such as fringed long skirts or a basic black shirt.

Ode and Yoshihara also sent out a few jackets — oversize and in denim or Army green — with four sleeves each and a zipper or buttons on both the front and back. They were a sort of cape-jacket combo that showed that despite the elegance of the designers’ pieces, they still know how to inject an ounce of humor into their collections.