Sarah Burton wanted to strip everything back, and offer an X-ray vision of the clothing. 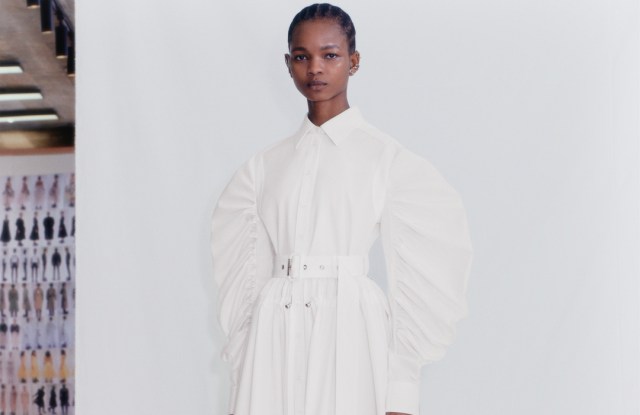 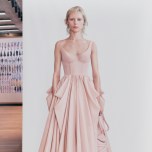 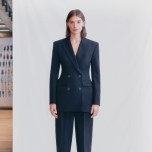 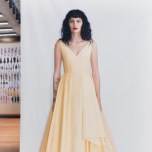 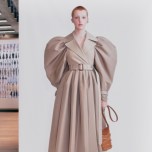 Sarah Burton’s latest collection for Alexander McQueen is full of dramatic cocoon shoulders, draping in the shape of butterfly wings, gossamer tulle — and other fabrics drawn from the deadstock pile.

Burton had already been using deadstock for pre-spring, reworking it every which way, covering it with prints and oversaturated colors, or splicing together fabrics with different textures and finishes.

For spring, she took the World War Two British-ism of “make do and mend” to another level, using more surplus stock, and donating batches of the stuff to a host of universities.

The designer also wanted to strip everything back and give an X-ray vision of the clothing, hence the spare faille dresses with corset tops and long, full ballerina skirts or a dress with airy layers of tulle like a cloud of cotton candy.

Sleeves were puffed, sculptural and gossamer light, adding Elizabethan grandeur to pieces ranging from trenchcoats and cotton midi-dresses to denim jackets. A leather biker jacket with with big tulle sleeves looked ready to flutter right off the rail and into the sky above McQueen’s Old Bond Street store.

The men’s pre-fall 2021 collection was full of hybrids and sculptural shapes, too, and shown alongside women’s spring at the store.

“Shape, silhouette and volume, the beauty of the bare bones of clothing stripped back to its essence — a world changed with emotion and human connection,” were the words Burton used to describe the collection, and the short film that accompanied it.

Directed by Jonathan Glazer of “Sexy Beast,” and “Under the Skin,” the film was shot in East London a few weeks ago.

The film had a post-apocalyptic — or maybe just an early-morning — feel, with male and female models wandering along the banks of the Thames (and through the chilly river itself) on a winter’s morning.

Wearing party gowns and statement sleeves, they could have been returning home from Christmas revelries, or maybe they were just camping under a bridge in London, looking fabulous and happy in the mud.