Riccardo Tisci described the collection as “a love affair between a mermaid and a shark, set against the ocean, then brought to land." 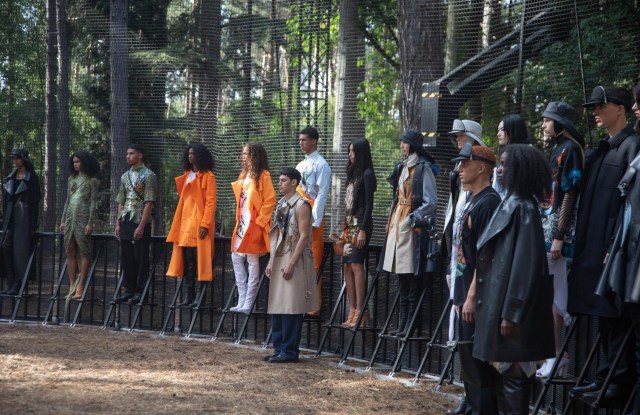 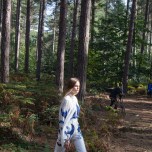 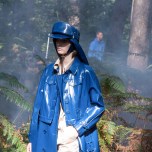 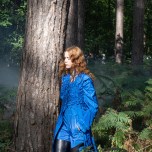 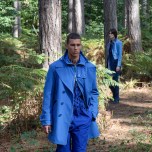 Oh, to look toward 2021, a year that’s already looming big and bright in the collective imagination. The year promises a fresh start, a burnt-out virus, a new vaccine and the freedom to roam — without having to strap on a face mask.

Riccardo Tisci sees better times ahead, too, with a collection that glowed in bright orange, peacock blue and with crystal embellishment, in a sunny and lush forest of towering birch.

In keeping with the times, Tisci opted for a livestream event with no audience at Black Park in Buckinghamshire, an hour’s drive outside London.

Having spent much of his lockdown on Lake Como, reconnecting with his family and with nature, Tisci had wanted this show to be an homage to the purity, simplicity and stillness of the outdoors.

The collection was bright and bold, taking inspiration not from the woods but from the sea. “A love affair between a mermaid and a shark, set against the ocean, then brought to land,” was how Tisci described it.

Fresh, youthful and brimming with whimsy, the collection was also smaller — and more distilled — than in past seasons, with 59 looks, slightly more than half of what he showed last season.

Since he joined Burberry nearly three years ago, Tisci has been churning out tailoring and streetwear, looks ranging from punk to bourgeois, in his bid to please a large swathe of customers.

Not any more. How old — or young — do you have to be to wear a rubbery bright orange fisherman’s jacket and matching overalls? Or a nubby peacock blue knit? Or a long coat that’s part trench, part denim jacket?

“The world has reset, and I feel like I have reset myself as well,” said Tisci during a FaceTime call following the show. He described the collection as being free, romantic, classic and young. “It has only one identity, it’s very Burberry by Riccardo Tisci.”

He pointed to all the bold primary colors, a departure from his beloved black, and Burberry’s trademark beige. “Of course, you have the beautiful trenches, but I took it one step further: I made blue the new beige.”

There were lots of whimsical touches, too: naif hand-drawn mermaids, fish and stars floating over a pair of men’s white trousers; A-line coats printed with blue water, shells and fish, and a big, blue doe eye staring out from a fluttery silk blouse.

By contrast, the atmosphere had a menacing edge, from the men in dark suits marching behind the models at the start of the show, to the stylized fight scenes of the accompanying performance, which was created by German artist Anne Imhof.

The performance, which took place in a circular area surrounded by the models, had a cult-like feel with dancers, dressed in simple white Burberry tops and trousers, in a thrall to the live musicians on stage, or slowly carrying fellow members of the troupe on their shoulders. Imhof’s long-term collaborator, fellow artist and musician Eliza Douglas, performed.

There was something ritualistic about it, in a sinister way: Had an outsider stumbled by chance upon the event, “Blair Witch Project” or “Secret History” style, they would have understandably freaked out, but maybe this was just Tisci’s way of conjuring all the angst and darkness and isolation of the past six months — and then beaming out his hope for better times.