The brand unveiled its latest collection, focused on an effortless chic look, on the beach of Tuscan luxury resort Forte dei Marmi. 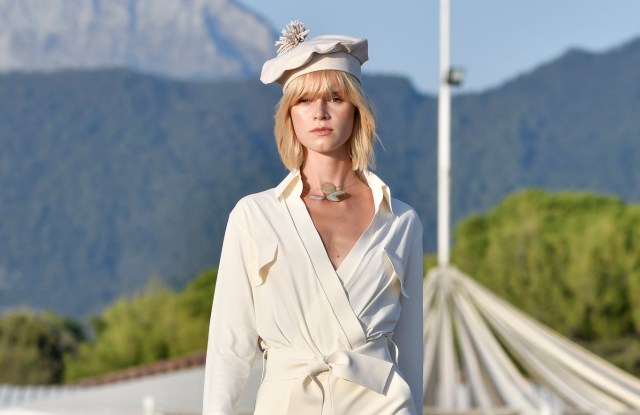 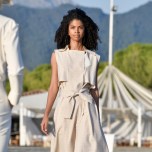 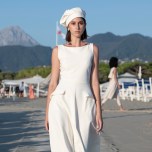 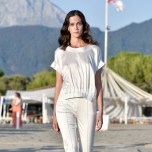 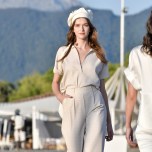 Since 2015, designer Chiara Boni has shown her collections at New York Fashion Week, but this September she was forced to cancel her seasonal business trip to the U.S. due to the global pandemic.

Instead of opting for Milan, where the company is based, the Tuscan designer decided to show in a location close to her heart: Italy’s luxury resort Forte dei Marmi, where she spent her childhood summers, where she went dancing with friends for the first time and where, with her former husband, she ran a popular club, which is now the beach club and restaurant of the five-star Hotel Augustus — the location of the show.

“Forte dei Marmi is a really special place for me, I have so many memories collected over the years in this location,” said Boni, who gathered together in Forte dei Marmi a small group of journalists, who were also entertained after the show with a synchronized swimming performance hosted in the beach club’s pool.

The location of the show, staged at sunset on the beach, inspired the overall mood of the collection, which celebrated a timeless resort look evoking the elegance of Forte dei Marmi in the Fifties and Sixties. (Actually, the Augustus beach was originally the private lido of the Agnelli family, who definitely set the bar for Italy’s effortlessly chic lifestyle.)

Opting for a monochromatic palette of white cream with light beige accents, which fused with the sand of the beach, where models walked barefoot, the designer unveiled a lineup that included one-shoulder dresses in a soft jersey fabric, but also silk tops tucked into matching fluid pants, and a flattering swimsuit enriched with dramatic draping and gold metallic details — the uniform for beach parties that Boni imagined for the summer 2021 season. The collection also featured more constructed body-con frocks, still lightweight and fresh, but also a double-breasted blazer with matching cigarette pants. Tulle frills and trains gave a siren-like look to dresses and sarong-like skirts, while sartorial patterns added a mannish twist to jumpsuits and separates cut in streamlined silhouettes.

The Sixties music, the colors of the sky and the sea at sunset and the stunning location certainly helped boost the success of the show which — smaller and more personal than usual — was the brand’s best so far.