Tomo Koizumi described his sculptural creations for Pucci, many cut like swimsuits, as "a little more wearable" than his custom creations. 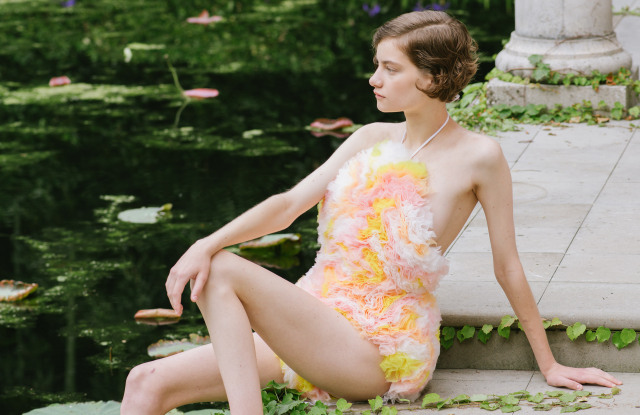 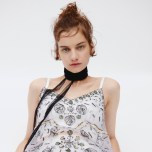 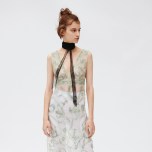 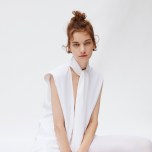 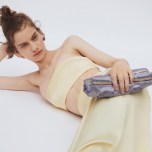 It turns out more subdued colors, and solids, were fascinations for the founder, who submerged flowers in water, photographed them and brought these images to the textile factories to approximate the gentle shades he registered. For spring 2021, the Pucci creative team and Koizumi settled on a print from 1966 called Vetrate, a swirl of vivid yellow, pale pink, dusty cherry and white.

White was the surprise among the 11 tulle creations by Koizumi, propped on plinths in a blinding pavilion in the video reveal. A short film depicted young models in pajama silks, bandeau tops and Grecian-esque dresses from the main collection cavorting playfully around the Koizumis, propping their heads atop the bulbous confections and caressing their fluff rather than wearing them.

In a Zoom call, Koizumi noted that his white puffs are lined with the Vetrate print, and the rounded shapes telegraph the femininity of the Florentine house. “We tried to do something not so obvious, but still so Pucci,” he reasoned.

The Japanese designer described his sculptural creations for Pucci, many cut like swimsuits, as “a little more wearable” than his custom creations, which are catnip for extroverts like jewelry designer Lynn Ban, or actress Gwendoline Christie, who modeled in Koizumi’s impromptu show last year that stole New York Fashion Week.

While Pucci plans to produce the tulle looks for its boutiques, and offer them for wholesale, the brand also conscripted Koizumi to do some T-shirts, simple sandals with a big tulle pom-pom, and a handbag as fluffy as a Pomeranian fresh from the doggie salon.

These are Koizumi’s first accessory designs, and he was bullish about them. As the Pucci p.r. dangled the pooch-like pouch in front of the screen, Koizumi said: “It’s really cute. It might be bestseller.”