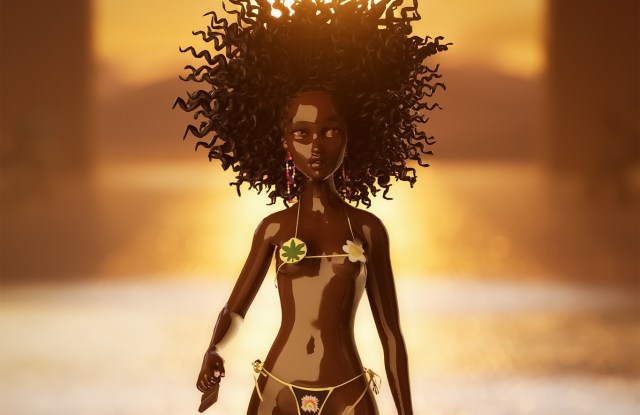 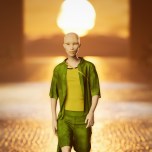 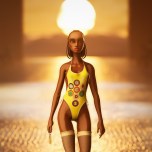 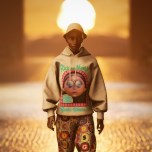 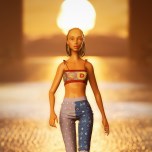 “People just want to be entertained and this has always been at the core of the GCDS brand,” the designer said during a Zoom preview of his “Out of This World” show, whose digital cast was shiny and doll-like but inclusive in race, at least one plus-size — and even a couple of pointy-eared green aliens.

To make the show a virtual reality, Calza tapped some serious digital players, including “godmother of virtual reality” Nonny de la Peña and her tech firm Emblematic Group, U.K. artist/creative hacker Thomas Webb (who has done previous fashion work with Valentino and Mytheresa) and director Jeron Braxton, who helmed the futuristic animated video for The Weeknd’s “In Your Eyes.” (The online “after party” included VR rooms to explore, and some gaming capabilities.)

“We literally were Googling ‘best companies for video games,'” said the designer, who passed the time during lockdown sketching, playing video games and practicing nail art, showing off his own fab ombré metallic digits as evidence.

A cartoon sensibility and sentimentality ran through the collection, which despite the intense digital boobage, wasn’t overtly sexy so much as Saturday morning cereal sweet.

Calza’s latest digital project is a follow up to apparel he developed in 2019 for characters in Nintendo Switch’s “Animal Crossing: New Horizons.” He’s also collaborated with a number of Universal and Warner Bros. entertainment properties over the years,  and this season tapped Cartoon Network’s “Rick and Morty” for artwork on hoodies and varsity jackets. Although the commercial tie-ups aren’t a huge moneymaker, there’s a method to them: “I’m a young brand so I don’t have the heritage of big brands..so to me, it’s creating a heritage and a world of reference outside of me.”

Creating the digital show was even more challenging than the real thing, particularly communicating with engineers between Milan, London, Atlanta and Los Angeles, he said, adding that he likes the idea that digital leaves some reality to the imagination. “We will offer customers a buy now that’s a little bit of the general aesthetics and key items,” he said. “But you’re going to see the real collection in six months, and for me, it’s even better because you aren’t going to get sick of it before it’s out.”