Forget Zoom wear. Wes Gordon believes that life still offers occasions of celebration, and, he says, women want to dress for them. 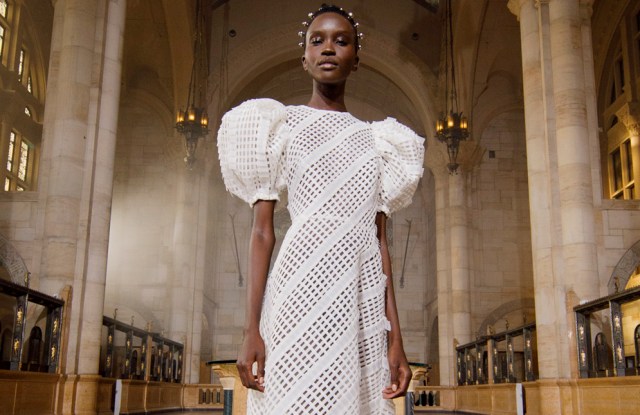 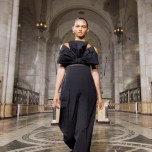 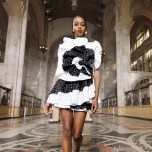 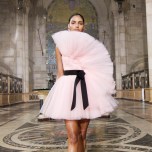 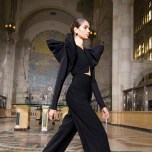 Wes Gordon believes that women want to get dressed. He’s banking on it.

The Carolina Herrera collection that Gordon unveiled today is all about getting dressed. Really dressed. These aren’t waist-up, casual glam clothes for Zooming, but clothes for living in, and going out in, the world, with a decidedly evening bent to boot. Gordon worked that direction apologetically, spending not a moment on anything resembling an at-home loungewear component.

Which is not to say he’s oblivious to reality. To wit, he conducted a preview appointment from his farm in Connecticut, where he just started quarantining the day after returning from Atlanta and his sister’s backyard wedding. Yes, she wore a real bridal gown.

“Our women are still celebrating. Those life milestones are still happening,” Gordon said. “There are still birthdays, there are still weddings, there are still those occasions with close friends and family, and you want to feel joy. The look and feel of the celebration have changed, but it’s still a special occasion, and clothes can help make those moments something you remember.”

To capture the sense of occasion, Gordon created a show for digital viewing, his venue the old Williamsburg Savings Bank headquarters in Brooklyn. He noted that, despite the lack of audience, creating the show felt happily familiar. “We did the whole thing as if it were a real show,” he said. “KCD produced it, we had hair and makeup, we had all these people whose [typical] annual professional calendars are defined by fashion shows and fashion week. People who do it because they love it and they are passionate about it.”

Gordon worked a deft, delightful fusion of flamboyance and restraint. As always, he drew on elements of the house founder’s style, both her classicism (the essential white shirt) and her flamboyance (Ruffles! Dots! Volume!). His favorite accessory: big “pearl” button earrings taken from those Mrs. Herrera wears in a famous Mapplethorpe portrait.

Yet here, Gordon found inspiration as well in two other women with very different styles: Mia Farrow in “Rosemary’s Baby’s” mode, which is to say, spare and innocent, and Sade, from whose controlled bravado (and single, long braid) Gordon derived a determined sensuality.

The disparate references coalesced into an intelligently rendered lineup in which he tempered his more effusive inclinations with smart restraint, including all-flat shoes. One of the collection’s recurring themes, a demonstrative triple-loop bow bodice, topped otherwise spare silhouettes: short and long dresses in black and pink, respectively, and reimagined as a cropped top over black high-rise trousers. Similarly, a bolero with take-flight shoulder treatment (inspired by a different Mrs. Herrera photograph) tops mannish trousers and brogues. Curvy dresses and pants looks cinched by wide belts reflect the Sade influence. As for the numerous short, flirty dresses, they charmed, from a plain white mini (the most overt Mia homage) to those with varying degrees of decoration — black slip with big bow detail; white petal-like embroidery; a fanciful eruption of pink tulle.

Throughout Gordon worked in some fresh shirting stripes and other looks that could pass as daywear. But overall, this collection was about dressing up for events and, Gordon said, “getting back to falling in love with fashion again.” Will women feel the same way? Let’s hope so.