It was fashion with a capital F. Make that three Fs: Fashion, Fantasy, Fun. 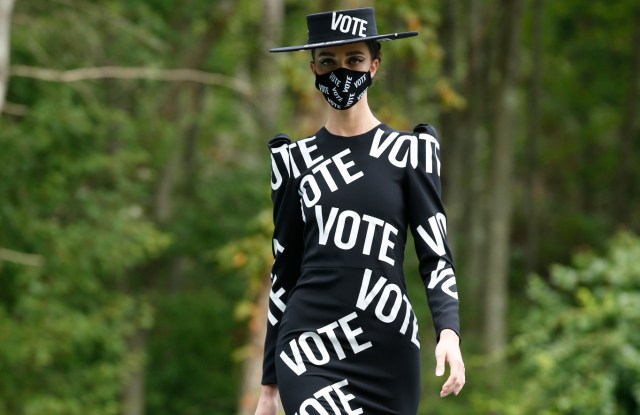 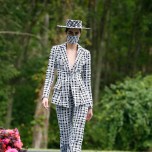 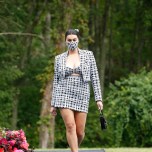 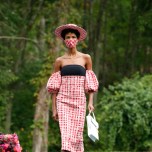 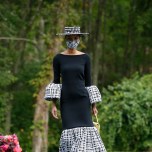 “Dear God, if there’s ever such thing as a live fashion show again, I promise not to complain anymore, not about traffic, or late starts or crummy venues, or dull clothes or excruciating schedules. I promise. Amen.”

Christian Siriano’s live show felt redemptive, a wonderful expression of normalcy at this awful moment. Make that pretend normalcy — wonderful still — because so much of it was really not normal at all.

Connecticut wasn’t normal. Siriano welcomed his 80-or-so guests to his new, spectacular modern house in Westport, and even the noblest of visitors could be forgiven for feeling a twinge of real estate envy. Upon arrival, we departed our vehicles on the main road, hoofing it up the stone driveway, stopping for temperature check (mandatory) and Champagne, rosé or gin cocktail (up to you). Then it was off to the backyard oasis centered with a pool decorated with eruptions of vibrant flowers and covered with a pair of footbridges for the models to traverse.

Stranger still — people. Many people. Maybe not by old-time fashion show standards, but definitely by COVID-19-era standards, as the largest crowds many guests have encountered until now have been on socially distanced checkout lines at the grocery store. And the people were dressed! Throughout the week, many designers have predicted that work-from-homers are eager to put on some real clothes and leave the house for events that are — well, not in the house. Here was exhibit A, a joy to behold. So, too, the chance to distance-chat, if only briefly.

Conversely, despite the ample security measures in play, for some, this foray into a group might have given pause: “I’ve been housebound for six months; will I catch the virus at a fashion show?” That concern faded as you settled into your personal space: a roomy chair atop a wicker rug set yards away from the guests one seat over on either side, a giant picnic basket beckoning under the hazy sky. The choice was yours: nibble now or hold it for the car. (This is still fashion. Car dining won.)

Then the show started — the genuine redemption, that moment of validation of all you’ve been missing about real, live fashion shows. Siriano didn’t pretend to make his show about practical clothes women will wear when they emerge from quarantine. “I approached it as, with everything that’s happened, let’s just do fantasy here…” Siriano said during a preview. “Hopefully everybody will escape for 20 minutes and feel a little bit like they’re in another place.”

These clothes were bold and fantastical, yet Siriano’s inspiration came from home. Specifically, he drew ideas from his quarantine leisure activities: poring over a stack of old comic books that his mother sent him (at a distance, one could miss the pop print derived from those perusals), and watching old movies. Old as in late Eighties-Nineties old — and fun to boot; we’re not talking “Casablanca.” “Don’t Tell Mom the Babysitter’s Dead” was his first exposure to the job of fashion designer (Christina Applegate played a 17-year-old who fibbed her way into the job). Then there’s “Clueless”; Cher Horowitz’s feisty gingham ran throughout Siriano’s show, opening it with a skimpy, sexy little skirt suit and almost closing it with an extravagant bra-top-and-ballskirt affair.

In between, as promised, Siriano delivered a lineup of feel-good fantasy clothes. That said, there were some pieces for some version of real life — the little suits, a comic-book pantsuit, a charming gingham dress with puffed sleeves and black bodice, and several quite lovely cocktail dresses. As always, Siriano showed the clothes on a diverse group of models. Their range of body types heightened the validity of his glam perspective.

As for the gowns, they were demonstrative in different ways. Mega volume came in a multitiered, multicolored pouf and giant ballskirts paired variously to bra tops and a spencer jacket. Just as bold: a sultry siren gown stamped again and again with a single word: VOTE.

It all felt joyful and buoyant — in one instance, quite literally. The noticeably pregnant Coco Rocha closed the show in a body-con red gown with an endless train. As she neared the end of her backyard stroll, rather than follow the other models back into the house, she decided to take a dip. The dress looked great when wet. Coco looked even better.