"I've always done this collaging and making artwork out of someone else's garbage," said designer Tara Subkoff of the brand's sustainable approach. 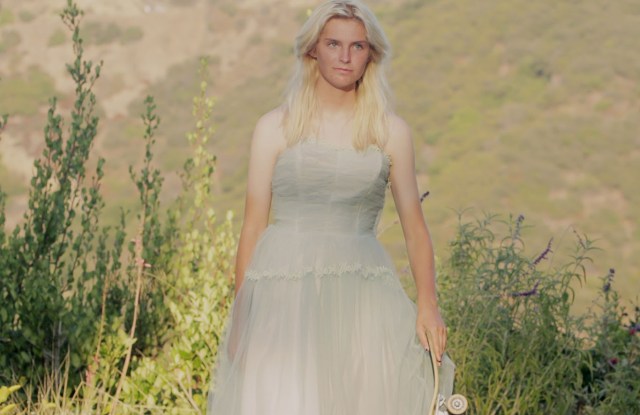 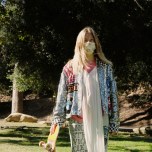 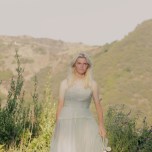 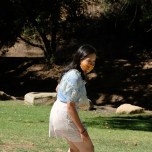 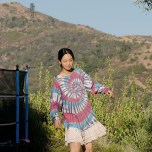 Tara Subkoff’s relaunch of Imitation of Christ isn’t so much about creating another fashion collection as it is about starting a creative movement, and encouraging young people to up-cycle, reuse and refresh in the name of sustainability. Which is why the designer’s latest outing, celebrated with dueling music-filled events in New York and Los Angeles on Monday night, is going straight to retail on The Real Real. She hopes selling on the re-commerce site will inspire would-be re-fashionistas, while raising funds for Greta Thunberg’s Fridays for Future organization.

“I’ve always done this collaging and making artwork out of someone else’s garbage,” said Subkoff of the season’s glam streetwear, $125 to $795, which mixes chopped-up vintage slips and dresses with sports jerseys and sweatshirts, some of them tagged with graffiti. “It’s something Imitation of Christ started in 2000 that felt relevant then but feels even more relevant now that you look outside at the fires in California and all these orange skies.”

Subkoff’s approach is also about cultivating grassroots community; for each collection, she chooses different young design collaborators — Lola Valenti Roberts, Tessa Crockett and Violet Baudin Lackey were this season’s. And rather than models, she tapped female skateboarders to appear in a short collection film shot at a local L.A. skate park.

“I’ve been inspired by looking for heroic acts in the everyday,” she said of one of her pandemic coping mechanisms. “In the skate park, I’ve noticed there’s usually one girl who falls down a lot and all the guys laugh at her. But she picks herself up again and again and figures out how to do the damn trick, even better than the guys. It’s such a metaphor for being female!”

Imitation of Christ is about creating “conversation pieces” to get people excited by the power of creative expression like she was back in the day she was studying fashion at Parsons and drooling over Martin Margiela’s work. “That’s what this new day in fashion is about,” Subkoff said. “It’s less about the big brands and more about what people can do at home. I’m begging, ‘Please imitate this!'”