Live from the Spring Studios rooftop, it's Jason Wu. 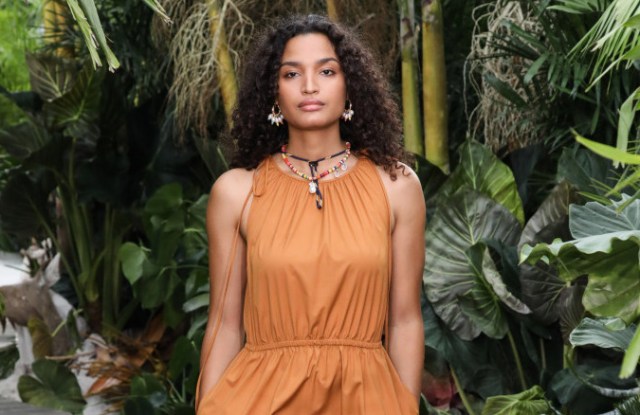 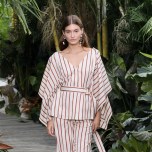 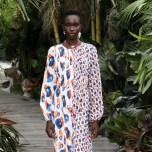 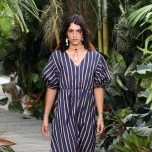 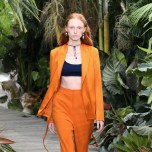 Why risk the contact of a live show? Shows cost a fortune. Who’s going to buy and wear a season’s worth of clothes right now, anyway? Despite the myriad prudent, powerful reasons that virtual shows make all the sense in the world in this COVID-19 season, being at Jason Wu’s live show at Spring Studios on Sunday night felt great, and not only for the plentiful charm and appeal of the contemporary collection that he put on the runway for the first time.

The event — and it felt like an event — provided a harbinger of normalcy at a time that’s anything but. Yet this wasn’t a normal show: a tiny audience, so no crowds at the entry; a phone health questionnaire to fill out (at least one tech moron in the audience found it a challenge); only a handful of people at a time allowed in the big elevators, which could be commandeered for a solo ride upon request.

Upstairs, on the roof, Wu created a green oasis, courtesy of his show sponsor, Lowe’s, which really came through. (So did Nature, with a glorious blue-sky day.) For the runway, a path of pewter pine planks curved its way atop a ground cover of sand and through a lush installment of more than 800 densely packed trees that will be donated to a small business, the A. Visconti Garden Center in Brooklyn. The rooftop layout was as clever as it was inviting because, despite the tiny crowd, it didn’t feel empty. From some vantage points, the Freedom Tower emerged beyond the trees, as a reminder that this was an unlikely urban oasis. The seating: wooden chairs with printed cushions and ample rear-end room arranged at wide intervals in compliance with social-distancing requirements. Like the trees, the chairs have an afterlife, the dining room at GMHC, which Wu is redecorating. Yet people gathered pre-show in little conversational clusters before settling in for a prompt start.

Wu was inspired by his “home away from home,” Tulum, and, like the set, the clothes had a distinct resort-vibe. (It’s a good bet we’ll see more of that mood this week.) While the collection’s easy-breeziness felt right for a holiday in the sun, its relaxed polish would cross over beautifully to city dressing — when, at long last, there’s a happy need for such.

Wu’s friend and actor/model Indya Moore opened the show in a long, sunset-russet dress with madeira lacework at the border over casual, fanciful flat sandals. That introduced a bounty of other dresses, cut with more or less flou — relaxed column with full sleeves in vertical halves of companion prints; slipdresses, either lean or with a gathered skirt; tucked-bodice sundresses; a marigold Grecian moment. Separates were similarly relaxed and often fluid, although Wu mixed in some jaunty Bermuda shorts and pants, and polite shows of skin via bra tops under jackets. Occasionally, he did some summer-fun layering, putting those tops over dresses.

Sometimes he kept the mood unfettered, and often, the detailing came via the fabrics such as open-work borders and a focus on stripes and prints, the latter sometimes mixed, as in a column dress with full sleeves, its vertical halves in companion prints. The palette ranged from fresh (crisp, earthen neutrals) to feisty (splashes of vibrant yellow, bright blue, hot pink) with plenty of stripes and prints in the mix. It all looked inviting, clothes for a world of beauty and happiness — in that sense, aspirational fashion.

After the show, some guests lingered to congratulate Wu and chat. (Remember social interaction? It’s nice.) “People say fashion is not necessary, and I beg to differ,” he said, from behind the “Distance yourself from hate” mask he designed for GMHC. (Departing guests received masks.) “Fashion gives us hope and glamour and beauty. And I’m sorry if we don’t feel that, how can we do anything else?”

Wu was happy to cast his friend Moore. “Indya says everything we need to be saying right now,” he offered. “This is the message. It can’t just be beautiful dresses. I don’t talk politics. But I do I talk about equality. In my show notes, I wrote that it’s about sharing love. It’s a very hateful place, this world. And if for 10 minutes we can forget about all the problems we have, then I think my job is done.”

On Sunday evening on the rooftop of Spring Studios, well and joyfully done.