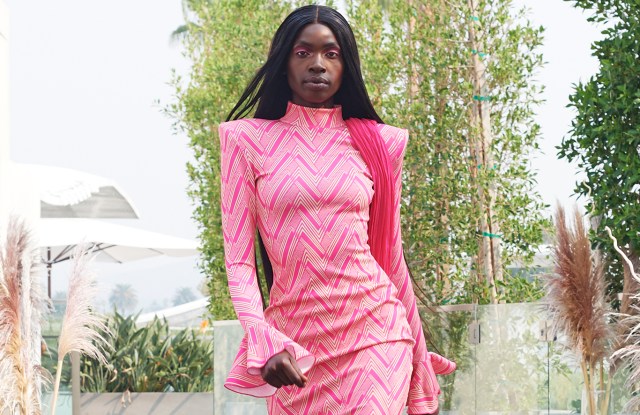 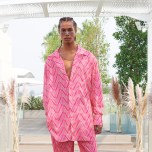 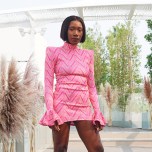 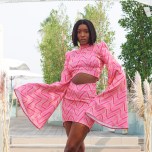 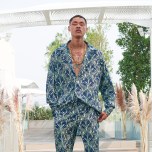 Now that pandemic health guidelines have put a premium on livestreams, look books and short films over in-person runway shows, the spring 2021 edition of New York Fashion Week is here, there and everywhere.

The strange set-up has allowed several Los Angeles designers to show in New York without leaving their hometown, including Claude Kameni, who filmed her collection show from the rooftop of Spring Place in Beverly Hills on Monday. It will go live on the Runway360 platform Tuesday at 7 p.m.

The designer, who aims to bring a modern sensibility to West African textile traditions inspired by her Cameroonian heritage, has been on a roll the past few months. In June, she dressed BET Awards host Amanda Seales in a regal, off-shoulder, high-slit gown for the broadcast. And in July, Viola Davis wore her yellow-and-blue African print blazer for the cover of Vanity Fair. Seales’ look was a nod to the 1988 film “Coming to America,” and in a full-circle moment, Kameni will have clothing in the sequel, “Coming 2 America,” due out Dec. 18, with costume direction by Ruth E. Carter.

Not bad for a designer who moved to L.A. from Washington, D.C., just a little over a year ago.

For her spring collection, Kameni set out to channel her flair for red carpet drama and bold print into more everyday ready-to-wear pieces, including a leafy-print camp shirt and pleated skirt cinched with a contrast print corset, and oversize jackets with wide-leg pants in cream, brown and blue block prints. She also took African wax prints and transferred them to jersey to make body con minidresses with made-for-the-stage, power-padded shoulders and fluted sleeves; cropped tops and flared pants, and a matching print turtleneck and drawstring pant set that was a new twist on the ubiquitous track suit.

The collection is about confidence, “being a boss, a boss woman or a boss man,” said the designer, who started designing in high school, went into business in 2013, and has dressed Tracee Ellis Ross, Kelly Rowland and Janet Jackson, thanks to their stylists discovering her on Instagram.

Kameni is conscious of the cultural moment, and how the fight for racial justice is opening eyes to inequities in every industry, including fashion. “We are moving forward as a society day by day,” said the designer, who used all Black models “because they need representation,” but wants everyone to feel like they can wear her clothes.

Not forgetting her love of a showstopping gown, the finale was a dramatic green wax print coat dress with exaggerated peplum and train catching air as the model walked. More than many of the sportswear pieces, it showed off Kameni’s particular talent for print placement in a more intricate way, something she might want to try to work into the simpler everyday pieces in coming seasons, too, to give them that extra something special that designer fashion demands.

But she has time — and interest from department stores Saks Fifth Avenue and Nordstrom. L.A.-based shopping center Hollywood & Highland is mulling a LaVie by CK pop-up, and there’s a potential upcoming Emmys dressing placement. “It feels surreal, everything is moving so fast,” she said. “But there’s no chance to stop now because it just has to keep going.”