The designers gave their signature tailoring a softer focus inspired by off-duty looks they imagined silent screen stars wearing while running around their Hollywood neighborhood in the Thirties. 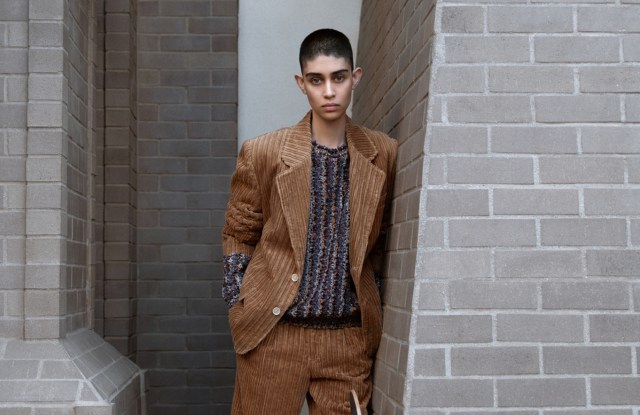 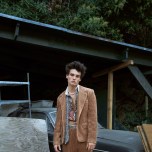 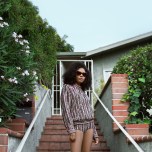 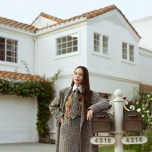 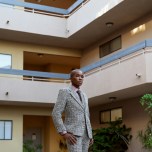 When it came down to the pandemic-era reality of how to bring a new fashion collection to life on-screen, Hollywood-obsessed Los Angeles transplants Brian Wolk and Claude Morais were ready for the challenge. Their last collection film, featuring two dozen Angelenos in mock Hollywood screen tests, has been traveling the international film festival circuit for more than a year.

“We have found films to be a more effective way of getting our message out, not only because of the amount of impressions and how easy they are to share, but because of the number of communities they touch that are not just fashion,” Wolk said during a preview Friday at the duo’s Hollywood home, which is not far from such hallowed early movie making sites as the original Pickford-Fairbanks Studio, Lasky-DeMille Barn and Chaplin Studios.

This season’s Wolk Morais short film “Driven” features a similar cast of L.A. characters and collection inspired by old Hollywood, but with a drive-by format and melancholy mood that taps into today’s zeitgeist of isolation, political outrage and yearning for a little of the glamour of yesteryear…any other year, really.

“We wanted to be able to tell a story about what is happening in the world now and balance that with our collection,” Wolk said of the film, featuring model Lydia Hearst, yogi Moon Unit Zappa, fashion consultant Katherine Ross, model agent Omar Albertto, club gatekeeper Henri Binje and more modeling looks in front of their home exteriors, front door or stoop.

The 26-night shoot had the designers and cinematographer Fiorella Occhipinti piloting a 2001 silver Lincoln, aka the Silver Fox, across a wide swath of L.A., from Laurel Canyon to Eagle Rock, Toluca Lake to Calabasas, to capture socially distant footage from the car window, along with sound clips to layer over it about how their muses are coping. “I miss energy, I thrive on energy,” one voice says. “When I’m walking on the street, if there is a white woman walking in front of me, I’m going to cross the street,” says another. The film was shown on the CFDA’s Runway360 platform, and premiered at the London Film Festival on Sept. 12, where it took home the award for best fashion film.

Styled by longtime collaborator Elizabeth Stewart, the collection leans into the tailoring that has made Claude Morais a favorite with Cate Blanchett, Julia Roberts and Jessica Chastain, but with a softer focus inspired by off-duty looks, the designers imagined silent screen stars Louise Rainer, Louise Brooks and Buster Keaton wearing while running around their Hollywood neighborhood in the Thirties.

In the spirit of recycling, they dipped into their own archives, reviving a few patterns and fabrics from past collections, as on an oversize black-and-white houndstooth Spencer jacket, worn over a black lace skirt made from a chopped up Thirties ballgown.

Their answer to quarantine-ubiquitous sweatpants is the “oxford bag classic trouser,” a wide-leg tweed pant paired with a metallic brocade banker shirt and snug tailored vest for a masculine/feminine play. “Buster Keaton wore them, David Bowie wore them,” Wolk said of the oversize pants.

Blazers in metallic tweed, raspberry herringbone or marigold corduroy look comfortably slouchy over pants, miniskirts and shorts. And a homespun-looking vintage-knit sweater and tap pants set; lame pajamas, and a sequin dress with the ease of a sweatshirt seem right for at-home glamour.

“We used super-soft fabrics that feel great,” Wolk said of responding to the new fashion reality. “But sometimes you do want to dress up…and we do dress celebrities. Janelle Monáe’s stylist is coming by today because she has a TV appearance next week.” Hollywood, at least, is getting back to work.