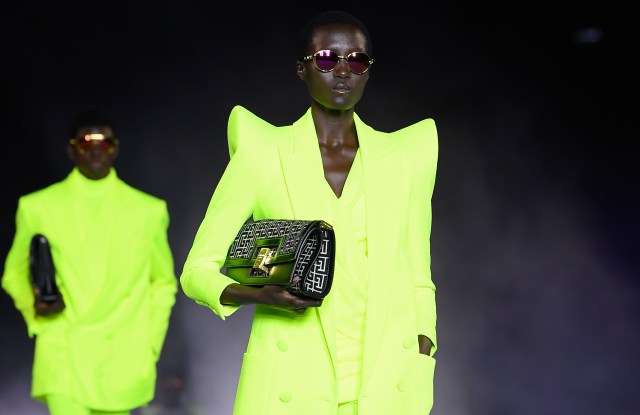 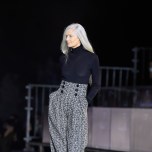 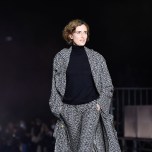 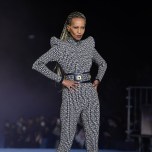 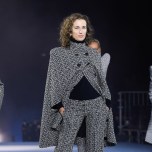 What is Olivier Rousteing — one of fashion’s youngest, most social media-savvy creative directors — doing trawling through Balmain’s archives, and scouring flea markets, too? He’s not only marking the French house’s 75th anniversary — he’s searching for more DNA, though he’s taken Pierre Balmain’s audaciousness and run with that idea for a decade already.

He’s more convinced than ever that heritage is crucial, and that the pandemic has ushered in a “new sense of luxury,” one hinged less on trends and more on careful spending on pieces that stand the test of time. Investment dressing is back!

And so he opened his mega show at the Jardin des Plantes with an old-school vignette curated by fashion historian Olivier Saillard and starring the monogram jacquard that the founder used in the Seventies for couture coats, ready-to-wear blouses and travel bags.

It was continuing the educational thread Rousteing started unfurling in July, when he sent a barge down the Seine with its main deck displaying archival fashions from Pierre Balmain and his design successors Erik Mortensen and Oscar de la Renta, along with iconic looks from Rousteing’s reign at the French house.

Rousteing had already used the interlocking Ps and Bs for handbags that are just arriving in stores, and were a click away during the livestream. Here the monogram was employed on high-waisted pants, trenchcoats, capes and suits — updates of the Seventies originals — worn by famous models of yore. They slowly encircled Rousteing, who was perched on a stool and taking in the soundtrack of Frank Sinatra overlaid with the voice of Pierre Balmain saying things like, “There’s a touch of sex in fashion now.”

That cued up the booming Depeche Mode, disco fog and Rousteing’s spring collection, which amplified Balmain’s commitment to tailoring — and Rousteing’s to major shoulder pads, here stacked into radical pagoda shoulders. During a preview, Rousteing suggested that nothing commands more authority than those twin peaks on any Zoom meeting. Even J.Lo wore them for her front-row appearance via a prerecorded video, one of 58 editors and celebrities broadcast from screens scattered among the first three rows of the bleachers.

Lockdown has not tempered Rousteing’s penchant for the brash glamour of tight pants flaring out over high heels, molded leather bustiers, tight denim knee shorts and sparkly sweaters and jackets sporting two million Swarovski crystals in total, according to the house. The men’s wear also skewed dressy, with tailoring in gray flannel and tuxedo fabrics or knit for neon sailor suits. While all the freaky shoulders were off-putting, the low-slung double-breasted jackets Rousteing has been wearing lately for his TikTok posts and Instagram Reels exuded a chic swagger.

The designer’s only concession to comfy dressing, which won favor during lockdown, was knitwear, and some bold-shouldered pantsuits with flaring pants in searing neon pink for her, Stabilo yellow for him. “It’s all jersey,” he said, “so it’s like a jogging suit.”