The collection had an athletic undercurrent, heightened by the stadium setting. 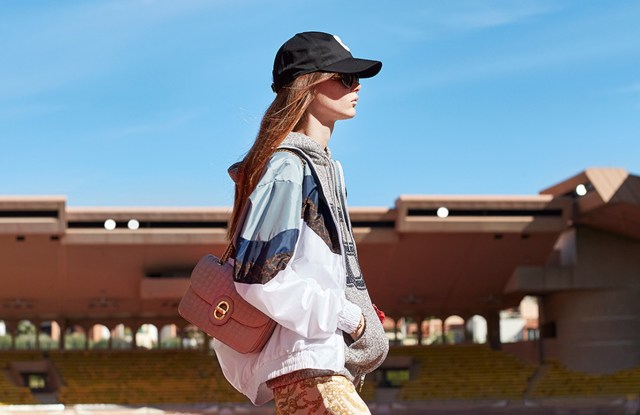 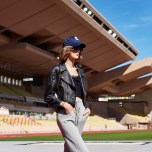 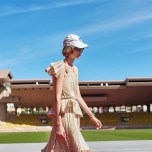 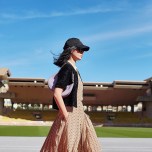 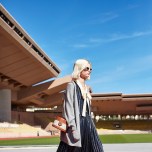 Every blade of grass at the vast Celine-branded stadium was styled to perfection — and so were the models who rounded the track’s eight red lanes dressed in the spring collection.

Seeing Hedi Slimane’s fashions parading in the fresh air and sunlight — instead of a dark runway venue fronted with some flashing, morphing contraption — made them seem friendlier, more wholesome. The look was cool, but less achingly so.

He had transported his gamine Parisians to Monaco, and this was not in service of a theme, but solely for the spectacular venue — the Stade Louis II — decked out with Celine flags and emblems, including one dusted large on the lawn.

The show was young and sprightly, echoing Slimane’s men’s spring video, with drones swooping around the outfits and the stadium lights blinking from on high.

Since arriving at the LVMH Moët Hennessy Louis Vuitton-owned house in 2018, Slimane ultimately settled into a groove of bourgeois chic that has proved influential, and there were still vestiges of that conservative style: pussy-bow shirts and blouses, blazers in natty checks, and little tweed jackets.

But his Celine girl now listens to rap and hip-hop, according to the press notes, so she’s fine to throw a camo vest, hoodie or flashy silk bomber jacket over her tea dress; show an expanse of stomach via a cropped sweatshirt or bra top with branded underwear elastic, and plop a trucker cap or bucket hat over her wash-and-go hair.

There was nothing nonchalant about the handbags, except in their approachable, small-ish proportions. They still thrummed with bourgeois aspirations and luxury, including a quilted style dubbed the Sulky, a wink to Celine’s equestrian roots. All the shoes were flat, including plenty of sneakers, but no one broke a sweat.