Chanel built its own version of the Hollywood sign in the Grand Palais. 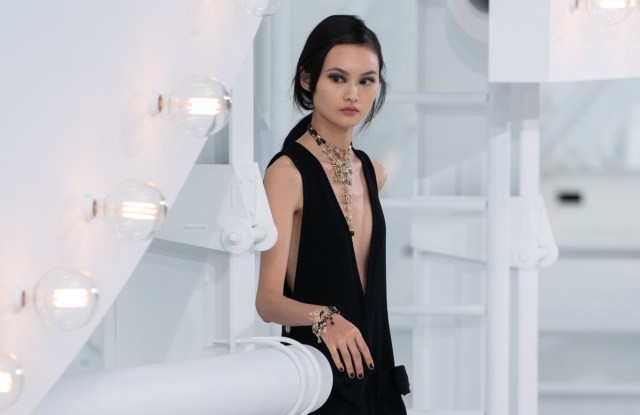 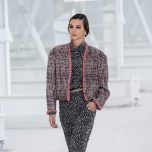 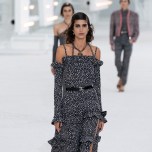 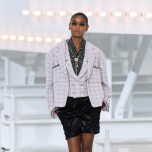 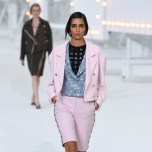 The red carpet may be canceled for the foreseeable future, but that didn’t stop Virginie Viard from building her own version of the Hollywood sign inside the Grand Palais in Paris, where giant white letters spelled out Chanel.

For the luxury brand’s last show at the venue before it undergoes renovations, Viard went back to the kind of bombastic set beloved by her predecessor, Karl Lagerfeld. (Though he probably would have thrown in a replica of the Hollywood Hills as well.) Fortunately, the collection mostly lived up to its billing.

The looks were a blend of logo-heavy daywear with an Eighties twist and old-school glamour that leveraged the Chanel codes of streamlined chic.

“This collection is a tribute to the muses of the house,” Viard said in her collection notes. “I was thinking about actresses at the photocall, on the red carpet, that moment when they’re being called to by the photographers: their faces a little distracted, their attitude a little out of sync with the outfits they’re wearing.”

There were fewer of them in the front row this season: house ambassadors such as Kristen Stewart, Margot Robbie and Penélope Cruz were unable to attend due to travel restrictions designed to limit the spread of COVID-19. Instead, there was a strong Gallic showing, with Isabelle Adjani and Vanessa Paradis among the guests.

Paradis was president of the jury at last month’s Deauville American Film Festival, where she walked the red carpet in a variety of Chanel outfits that were striking in their simplicity. Viard offered more of the same, making sure that when awards season kicks into high gear, stars can strike the same note of respectful glamour.

There was an offhand simplicity to a trio of dresses in a black-and-white floral pattern that casually revealed bare shoulders. A timelessly elegant black chiffon gown, trimmed with black ostrich feathers, could have been plucked straight out of the Chanel retrospective currently on show at the Palais Galliera museum in Paris.

There were edgier options, too. A black bustier minidress with a vaporous chiffon train projected rock-chick cool, down to the model’s hairstyle, a Stewart-esque asymmetrical slicked bob. But for effortless impact, it was hard to beat the black sleeveless tunic-and-pant combo, the top cut into a deep V-shaped cleavage.

It’s worth remembering that founder Gabrielle “Coco” Chanel headed to Hollywood in 1931 at the invitation of Samuel Goldwyn, but her designs were ultimately deemed too subtle for the silver screen.

The same could not be said of Viard’s daywear — starting with the power shoulders on the label’s classic tweed suits. The rounded sleeves projected a retro appeal on a black belted tweed jacket with an ivory satin collar and cuffs. But they jutted out aggressively on a gray-and-pink bolero version that busily topped a printed jumpsuit.

The designer’s Eighties fetish was on full display in the outfits broadcasting the word Chanel in neon bright colors, and denim pieces in a washed-out shade of fluorescent pink.

At times, the brand identity loomed as large as the lettered backdrop: the name was spelled out in silver letters on the sleeves of a cropped biker jacket; references to the Rue Cambon headquarters appeared as a colorful print on a polo dress, and the double-C logo became a graphic monochrome motif on sheer evening gowns.

Viard has a fondness for peculiar trouser shapes, which this season included capri pants cut just below the knee; ruched satin Bermuda shorts, and black tweed pants that morphed below the knee into a curtain-like veil of ruched black chiffon.

Those glitches were nothing a good editor couldn’t fix — as evidenced by the press kit shot by Inez van Lamsweerde and Vinoodh Matadin, which showed models in cinematic poses wearing the looks most likely to make the “best dressed” lists.

While the mix of minimalism and merch made for a somewhat disjointed outing, Viard hit enough high notes to merit a positive critical reception. As the sun burst through the steel-and-glass roof of the Grand Palais, casting great shadows on the white set, you wished the show producer would wait a little longer before letting the end credits roll.