The designer opted for a disco-charged lineup, and updated Eighties looks with silhouettes that were fierce and skimpy. 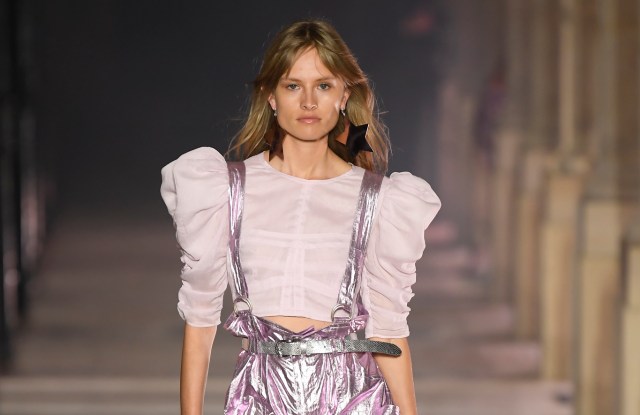 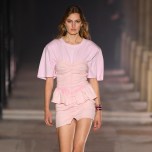 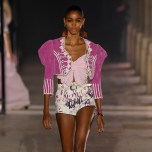 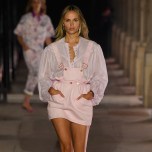 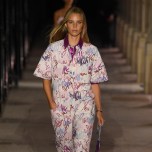 For spring, Isabel Marant went full throttle, raising her middle finger at the surrounding harbingers of doom with a disco-charged lineup that lit up the Palais Royal in flashes of fuchsia and gleaming silver pastels. Models took to the sprawling runway stage in looks that were fierce and skimpy — sequined bodices, studded leather jackets, acid-washed HotPants and shimmery Windbreakers. Show notes referenced Eighties icons Debbie Harry and Kim Wilde, but it also felt a bit like an update of “Dirty Dancing.”

“A bit more romance, yes, but worn with rock ‘n’ roll style,” said Marant, when a long, flowing prairie dress was pointed out on the lineup board backstage before the show. “You’ll see,” she added, with a glint in her eye.

Marant was out to amp up the energy to convey some positivity and get away from all the “end of the world” business — and mark the beginning of a new world, she suggested. So the label teamed with contemporary French dance collective (La)Horde.

“I love their work — it’s very contemporary and bit disconcerting,” she remarked.

Dancers swarmed the wide runway stage, sprinting under a backdrop of rowed columns at different speeds, chaotically, or moving in packs with the models. One formation had them in pairs, moving around each other, and throwing themselves into a fleeting embrace — a poignant reminder of a familiar gesture that has become foreign.

Given the party-like, theme, one wondered if Marant had been able to let loose recently. She said no.

“I miss it, but we’re trying to do as we’re supposed to — I wanted to take advantage of this moment to bring some joy and happiness,“ she said. A reasonable proposition, in normal times, but a fresh warning of rising COVID-19 cases from France’s health minister just hours before the show illustrated that nothing is risk free.