For his presentation in Paris, Kenneth Ize invited artist Maty Biayenda to live paint a mural as models milled around in his unisex clothes. 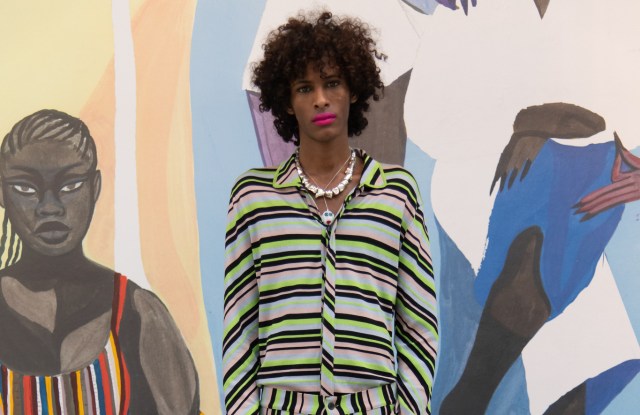 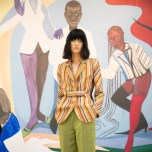 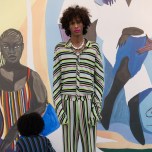 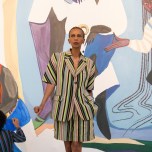 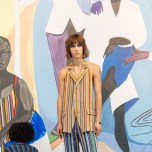 Six months ago, Kenneth Ize made his debut at Paris Fashion Week with a critically acclaimed show featuring Naomi Campbell. His life since then has been “a rollercoaster.”

He had barely returned to Nigeria to start production before the world went into lockdown. Retailers canceled their orders in droves. Salvation came in the form of a collaboration with the Karl Lagerfeld brand. “When I got my first paycheck, I bought some land and I just started building a factory with the money,” he said.

Ignited by the Black Lives Matter movement and a surge in violence against transgender people, the LVMH Prize finalist saw clearly that he could make a statement as a queer Black man with a multicultural upbringing. He noted that Nigerian law still punishes same-sex relationships by up to 14 years in jail.

“I’m like, OK, this is where I need to take chances, and I need to know what I’m doing exactly with my brand,” Ize recalled. “Africans are dramatic, elaborate, sophisticated. So, the essence of Blackness and the essence of who we are was exactly what I wanted to bring to the table.”

For his presentation at the Sphere showroom, held at the Palais de Tokyo in Paris, he invited artist Maty Biayenda to paint a large mural as models milled around in his unisex clothes.

There were new variations on his signature striped tailoring, rendered in traditional woven fabric, but also in summer-friendly chiffons and light knits. Standouts included a sleeveless top with a silky fringe skirt, and a brightly colored shirt, top and pants using the same stripe in several directions.

Accessories included glass pendants and earrings shaped like faces. Fully aware of the recent controversies surrounding the use of blackface in fashion, Ize saw it as part of affirming his identity.

“A lot of white designers have done Black faces. Just recently, during the pandemic, a designer did it, right? Why should I not be able to do it, and you wearing it? I’m a Black person doing it for you. This is actually why you need to wear it,” he argued.

“And I’ve not even only done Black faces, I’ve done white faces, I’ve done Asian faces, I’ve done all faces. This is also what the collection is about. It’s about community and intimacy,” Ize added. “Coming from a Black person like myself, and I’m doing my own face for you, it’s actually an honor.”