The designer recruited a cast of nonprofessional models for the coed display staged in the Parc des Buttes-Chaumont in Paris. 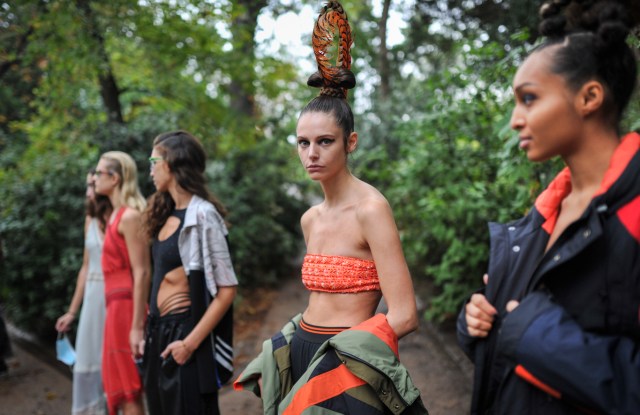 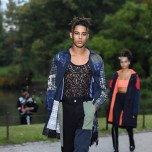 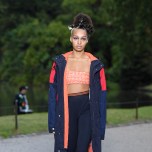 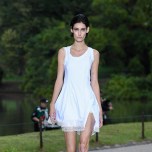 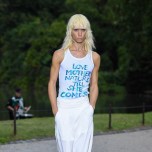 Christelle Kocher went back to her roots with an outdoor show staged at the Parc des Buttes-Chaumont in Paris, where kids in their fashion-week finery mingled with mothers pushing prams under a light drizzle.

The Koché designer, who began her career with guerrilla shows staged in the street, lives in the neighborhood and recruited a cast of nonprofessional models for the coed display. “I wanted to send a message about inclusivity, diversity and gender,” she said, standing in front of a snack bar serving waffles and crepes.

“This whole season has been very challenging. My mojo has been to send a message of positivity and optimism, and throughout, we have focused on finding solutions,” she added.

The day before the show, Paris introduced a law banning gatherings of more than 10 people in public parks as part of its efforts to curb the spread of COVID-19. The designer had a permit, so the event went ahead with guests mostly standing around an artificial lake. No sound system? No problem. Kocher brought in bagpipers.

The show opened with a khaki rain cape and croc-embossed rubber boots, part of a capsule collection for French outerwear brand Aigle. But most of the collection felt better suited for lounging at home than braving the great outdoors: think oversize shirts, slinky track pants or a belted hoodie dress with a subtle lozenge motif.

Kocher mostly stuck to familiar ground, with fresh variations on her signature soccer jersey dresses, and a gender-fluid approach: for her, an eau de Nil button-up shirt and pants worn with a black tie and chunky buckled brogues; for him, a black lace tank top, vinyl pants and a silky parka with an overblown lace motif.

Handcrafted touches included a lilac cape tufted with tiny feathers, and a Hawaiian-style shirt hand-painted by Alex Cecchetti, who also wrote the poems painted on strips of paper held by models as they emerged in pairs for the finale.

“What I missed the most during lockdown was returning to nature — something very romantic where poetry and emotions have an important place,” Kocher said. Or as her show notes explained: “Maybe there will be no more shows for the years to come. So f–k it and enjoy this one.”

Kocher is no longer the scrappy designer working on the edges of the system. Thanks to her partnership with Renzo Rosso’s fashion group OTB, she has access to important production resources. By weaving fashion into the fabric of the city, her shoestring display proved that people have the power, too.