The designer offered an artful exploration of layering and draping, with playful touches like a neat bow tied from extra shirt sleeves. 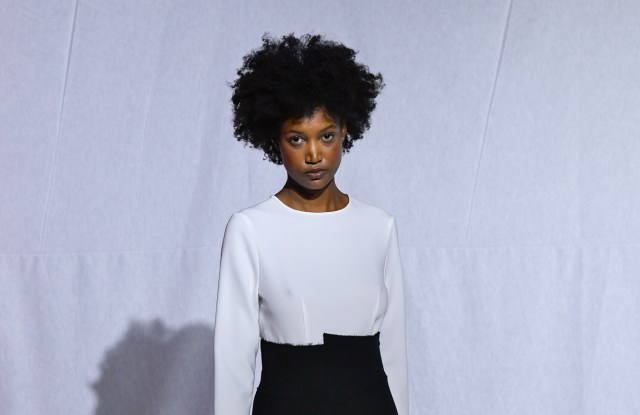 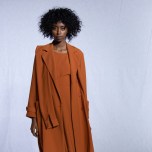 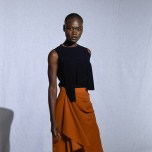 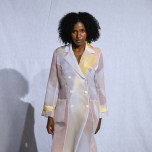 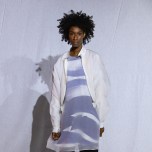 Mossi Traoré took to the Paris housing authority to show his spring lineup, bringing a touch of romance to the imposing glass and steel headquarters. His silhouettes were artful explorations of layering and draping, and included playful touches like extra sleeves pinned on the back of a black and ivory ensemble, tied into a neat bow.

“I drew on my usual codes, playing with asymmetry, and superimposed layers, as well as pleats, draping and the architectural nature of clothing,” said Traoré, who is known to reference Madame Grès as an influence. Layering was applied with a light hand. The designer used an interesting pleated organza to add texture to a long fluid white dress, in one instance — worn with a pair of sneakers. Images of calligraphy from Hassan Massoudy added a sense of movement.

Other looks contrasted cascading folds of rust-colored fabric with simple tops in black or white. In a nod Indian influences, there were a number of handsome trouser-tunic combinations.

The winner of ANDAM’s Pierre Bergé prize this year, Traoré founded his label on a quest to bring together different styles and art forms, and introduce fashion to people who might otherwise not have access through a professional training school he set up in the suburbs.

He kicked off the show with a troupe of modern contortionist dancers who twisted their arms in improbable positions and performed acrobatic flips to French rap music. In contrast, a ballet dancer carried herself across the stage in dainty steps, and twirls.

Backstage, after the show, folks were curious about the dancers. The classic ballet dancer, for example, how long have you known her?

“A day,” he quipped. Indeed, Traoré has a knack for pulling together projects with unlikely odds — even under a tight deadline. With extra attention and prize winnings, if this collection is any indication, he should be able to take the label to an interesting new level.