“It’s a bit like a classic wardrobe on steroids,” said Julien Dossena. 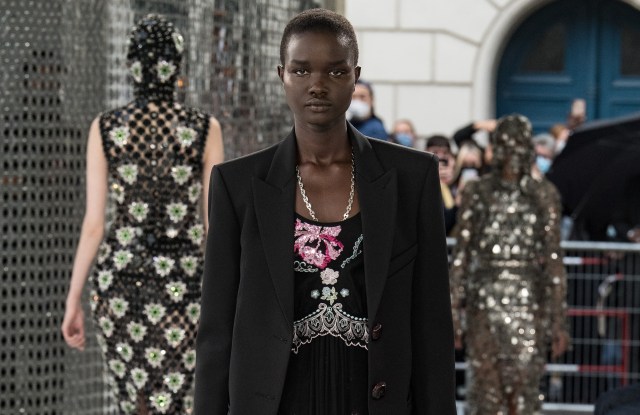 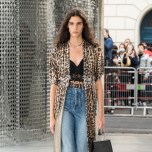 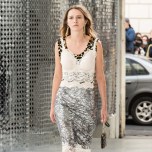 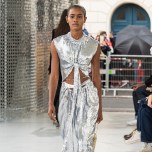 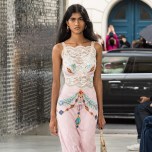 Embracing the chaos of the streets, Julien Dossena offered a compelling lineup that pressed together a multitude of references and materials — flea market style — layering lacy dresses under bulky fur-lined coats, and throwing three-quarter length suit jackets over faded jeans.

“I was drawn toward what I missed — the streets. Being in the streets, the streets of my neighborhood,” he explained. This wasn’t the tony 16th arrondissement, but the Marais, not far from the diverse and lively districts of Belleville, Republique and the Bastille. Brushing aside the bourgeois aesthetic that has swept French fashion lately, he probed the limits of bad taste.

“It was a sort of flirtation with proportions — I tried to bring the street into fashion,” he said. He pointed to a look on the board behind him. “This could be a jacket that belonged to her father or grandfather — with an old pair of jeans,” Dossena said.

Homing in on one of his signature silhouettes, the lacy nuisette dress, the designer bulked them up with exaggerating cups, framing breasts in interesting ways.

Clinking down the runway, metal embellishments — the house’s trademark chain mesh — ran throughout, with extra-large hoops as the latch for a zipper, or an undulated metal plate as a belt. He took a new direction, but offering prints with blown-up images of jewels on chains.

A trompe l’oeil jacquard looked like an old curtain, with fake folds, and he applied slick, clear plastic to the sleeves of an otherwise classic tan trenchcoat.

“It’s a bit like a classic wardrobe on steroids — I pushed everything in a bit of an exaggerated way,” he said.

The results were glamorous and real, which came as a welcome proposition for a changed world — one in which people’s closets are fuller than  their wallets.