Infused with bourgeois codes, the lineup also had a deviant streak. 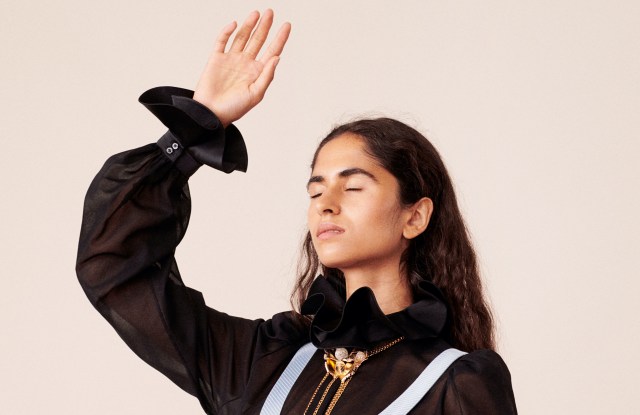 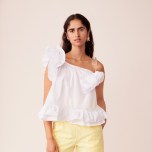 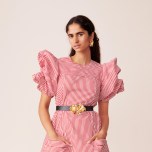 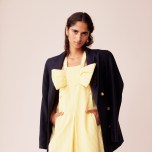 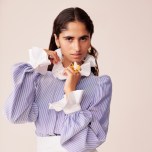 Prune Goldschmidt left her home in Bordeaux and took to the French capital to present the label’s debut collection, offering a selection of high-collared classics, traditional stripes, puffed up sleeves and very short shorts. Infused with bourgeois codes — of the timeless sort, if freshly plucked from the provinces — the lineup also had a deviant streak, with stylized Kama Sutra prints and black leather HotPants that were gathered around the legs.

“She’s a bit childish, but she’s also an audacious woman — not afraid to say what she things and to wear what she likes,” said the designer, who has designed children’s clothing for Sonia Rykiel, and won recognition for her jewelry creations. Goldschmidt went extra high with waists and Medici-like collars —  inspiring respect, she suggested —  while also applying ruffles and the occasional bow to the clothing, creating an aesthetic that felt coherent and recognizable. There were transformable pieces, too, including a dress that could be worn like overalls over a blouse, or, upon removing the straps, as a bustier dress, shoulders bare.

“I want to be there for women,” she remarked, noting the label uses top quality materials. It just opened an e-commerce site and aims to forge partnerships with department stores and high-end multibrand stores  —  with an eye to international markets in Asia and the U.S. In a crowd of labels seeking to package French flair for audiences abroad, here’s one that stands apart. It is easy to imagine it will likely build an enthusiastic audience.