A nearly all-white palette made a compelling canvas for Browne's whimsy on Twenties-inspired sportswear. 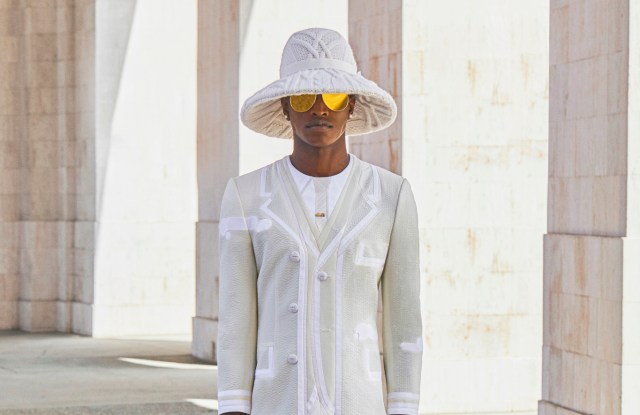 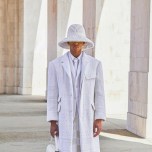 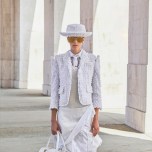 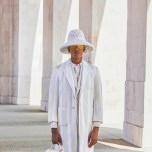 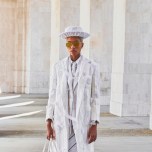 The Summer Olympics may have been postponed due the pandemic, but not in Thom Browne’s imagination. For spring, the mad tailor let his mind run wild with the Olympics theme, only with a 2032 Lunar Games twist.

A master of the live runway show, Browne put his presentation to film instead this season. The result was no less theatrical, from how he used L.A.’s 1923 Memorial Sports Coliseum as a scenic backdrop for his tongue-in-cheek Lunar Games broadcast, to the clever banter of the Intergalactic Committee members commentating as models and real-world Olympic athletes descended the arena’s epic staircases in the super Slow Mo fashion ceremony Browne loves so much. There was even a Hector moment!

“I was watching ‘Chariots of Fire’ and got stuck on the 1920s.…I also saw an image of [Twenties French tennis champion] Suzanne Lenglen in her amazing drop-waisted cardigans and pleated skirts,” said the designer, adding that the sporty, long-line silhouettes lent themselves well to how he likes to blur gender lines between his men’s and women’s wear.

Instead of traveling to Paris, Browne and his team headed West to make the film outdoors at the Memorial Coliseum, which has hosted the Olympics twice, in 1932 and 1984. “It was great to be able to do something — not being in Europe in June or September was such a hole for all of us,” said Browne, who lived in Los Angeles in the early Nineties, when he first fell in love with traditional men’s wear while shopping at vintage stores.

Even though there wasn’t the possibility to admire Browne’s Olympic-level handwork in-person with the film format, L.A.’s famous light did work its magic on the shimmering beading and textures to spectacular effect.

Speaking of L.A., Browne had a lot of screen time at the Emmy awards last month when “Schitt’s Creek” winner Daniel Levy reprised his kilt suit from the hit show’s wedding scene for TV’s biggest night.

“It’s nice to have someone wear your clothing and they win a lot!” said Browne. Spoken like a true competitor.