Saint Laurent's summer collection captured the sleek and groovy era of the Sixties. 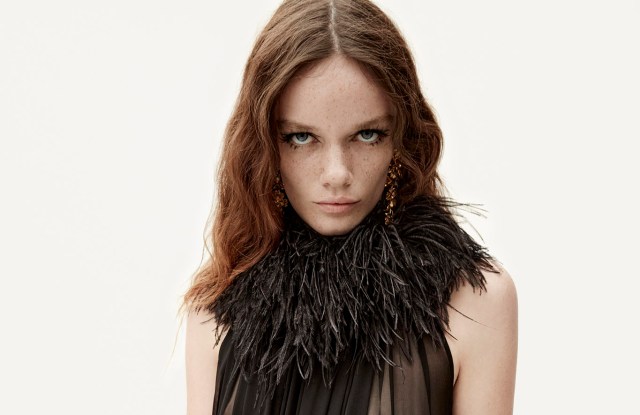 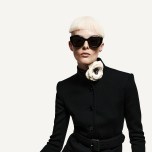 Watching Beth Harmon, the fictional chess whizz in “The Queen’s Gambit,” stride through her suburban Kentucky home in sleek jersey pants and neat blouses was one of the visual treats of coronavirus confinement. The Netflix series made a strong case for Sixties chic — also stoking new appreciation for bed jackets and cool housecoats. At-home glamour, hoorah!

Anthony Vaccarello didn’t need to binge-watch a popular series to immerse himself in that decade: A trawl through the YSL archives uncovered a thick jersey from the late Sixties, and got the designer thinking of tunics and trousers, lean jackets with tidy shoulders, silk blouses and sheer babydolls.

The parallels between that tumultuous decade and today weren’t lost on him either.

“I have found a natural echo between then and today: troubled times you know, but also times full of new ideas, a desire for changes and a better world,” he said, mentioning the social upheaval in France in 1968 and how the founding designer popularized pantsuits, tuxedos, sheer blouses and other garments that represented freedom for women.

While Saint Laurent was the first big house to step away from Paris Fashion Week and set its own pace for showing collections during the pandemic, Vaccarello said he wished not to “overthink” or “overreact” when it came to designing his summer offering.

“It’s a difficult situation, but from the specific point of view of a designer, it was very important to me to focus on the core value of my job: making clothes desirable and comfortable for today,” he said. “As cheesy as it may sound, perfectly thought and made clothes are what I enjoy making. It’s not about nostalgia at all. When you look at the [collection], there’s also a kind of futurism, like what the Sixties was about: Idealizing the future, like a phantasm but in reality. Saint Laurent was always about making real clothes.”

Speaking of phantasm, did Anja Rubik and Mica Argañaraz really tread the sloping ridge of a giant sand dune in high-heeled slingbacks at sunset, or was this a feat of special-effects wizardry? The house won’t reveal the location for the shoot, but insists it was a real desert, with a catwalk tucked under the sand.

To be sure, the dramatic, barren setting accentuated the lean, leggy silhouettes, rendered mostly in black. In addition to bare jumpsuits and HotPants were some lean, mean biker shorts. These were interspersed with looser looks in organza, some in big floral prints, the cuffs and hems ringed with fluffy feathers.

“They are actually two different expressions of the same idea: freedom of movement and the wish for the kind of light and fanciful fashion that makes you feel good,” Vaccarello said. “The shorts are more for going outside, and the marabou pieces are for the in-house life.…Women nowadays only want to wear those kind of cozy pieces to go outside.”

While famed for his spectacular outdoor women’s catwalk shows set against the backdrop of the Eiffel Tower, Vaccarello said he’s completely comfortable with film, and insisted this medium was not selected as part of a “digital strategy.”

“It’s more about a way to tell a story. As for this specific film, I thought it was important to not do ‘as usual,’ like just an empty room with walking models. My way to acknowledge the situation was to go somewhere else — to take people, at least virtually, to the free open spaces we all crave.”

At the climax of the 10-minute film, darkness falls and flames lick the edge of the sand ridge as models parade in filmy gowns, lean Smokings and demonstrative jewelry by Claude Lalanne. A message from Vaccarello flashes at the end: “I wish you were here.”