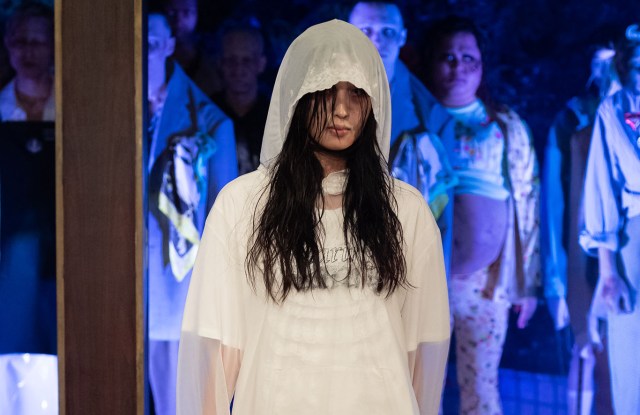 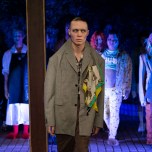 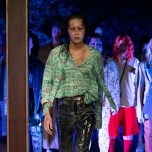 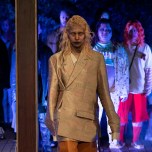 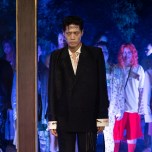 Masayuki Ino’s creative, often humorous takes on everyday items has earned him renown, particularly after he won the LVMH Prize for emerging talent two years ago. After showing in Paris last season, the coronavirus pandemic forced him back to Tokyo for spring, but he mentioned after his latest show that he may choose to present his collection in his home city again next season.

“I couldn’t have done something like this in Paris,” he said. “We were here in the venue all day long doing makeup, filming the video and preparing for the show.”

He was referring to the elaborate production that he created in a French restaurant, turning it into a haunted mansion of sorts. Only 20 guests were invited to the live show — it streamed online for others to see — and they were seated at tables spaced out across the restaurant’s main floor. Rather than food, each guest’s plate held a pair of virtual reality goggles. When instructed to don the goggles and start the video, audience members found themselves at the perspective of someone walking into and around the various floors and rooms of the restaurant, encountering all manner of ghouls and zombies as they did so. The video merged seamlessly with the show itself, with the same undead characters modeling the collection.

“After the Shibuya Halloween party was canceled, I decided I wanted to have my show be a kind of substitute for that, so that at least a few people could have a bit of fun,” Ino said, referring to the gathering in one of Tokyo’s busiest neighborhoods, which normally draws thousands of people but won’t take place this year due to virus concerns. “I was trying to decide between a real and virtual show, and in the end I decided to do both.”

Ino said he first imagined the characters who would walk in the show — the butcher, the businessman, the rocker, the clown, the crazy old lady — and then designed the clothes around those characters. “It’s fashion that’s right on the cusp of cosplay,” he said.

And perhaps only Ino could send out a motley crew of models in grotesque makeup and eerie contact lenses and somehow still make them look strangely fashionable and effortlessly cool. He showed various versions of oversize tailored jackets, classic button-down shirts and relaxed trousers. Leather jackets, frayed knitwear and roomy sweatshirts proved that Ino has not strayed from his streetwear roots, and a few aprons and some workwear-like coveralls played into the zombie narrative while still remaining relevant as fashion pieces.

At a time when many designers are scaling back and presenting their collections via look book only, Ino went in the opposite direction and immersed his guests in an experience that was as much theater as it was fashion.