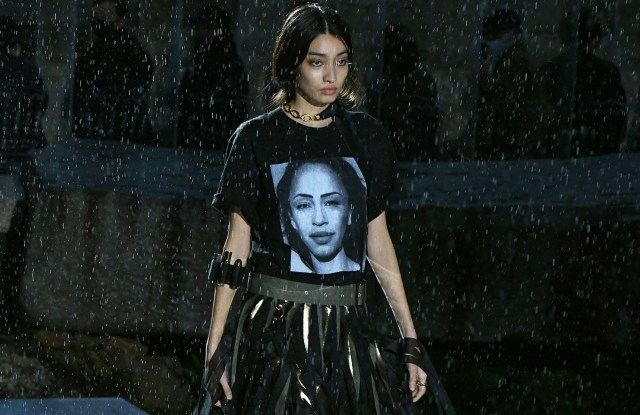 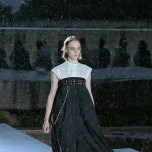 Chitose Abe’s spring women’s collection featured somewhat pared-down versions of her signature hybridized garments, with more of an emphasis on femininity than some of her previous offerings. But there was also no shortage of drama, with both the show’s location and the weather adding layers of atmospheric interest to the presentation.

The rain streamed down, forcing the models to step gingerly along the mirrored runway and the stone pathways of Hiroshi Sugimoto’s stunning Enoura Observatory, over an hour’s drive from Tokyo. But neither the poor weather nor the pandemic was able to put a damper on the mood among the crowd. Travel restrictions forced the Sacai designer, normally a familiar name on the Paris Fashion Week calendar, to debut her collection in her home country of Japan for the first time. And in order to protect guests from both the elements and the virus without distracting from Sugimoto’s beautiful Japanese garden, both the chairs and the rows of individual booths that housed them were crafted from clear acrylic.

“It took Sugimoto 20 years to complete this project, which he imagined as a place to share Japanese culture,” Abe said of the venue, which opened in 2017. “He designed it to last for thousands of years. Since I knew I would be showing in Japan, I wanted people to be able to experience this special place.”

Despite the pandemic, Abe said a digital presentation or online show was never something she felt was right for her brand. “Holding a live show is very important to me,” she said. “While I wish more people could have been able to come, I was also happy that I could invite non-fashion people and others who normally wouldn’t see my shows in Paris.”

Abe said that the underlying concept of Enoura is echoed in her designs. “I take very standard, everyday things and use them to make something new, but also classic that will last. This idea of timelessness is strengthened by Sugimoto’s work.”

She also played with the idea of time in the video of the show that was streamed to viewers around the world. Spliced in with the live stream of the show were slow-motion shots of models walking in the dress rehearsal earlier in the day.

The designer took elements of classic garments and mixed them in unexpected ways, playing with proportions and silhouettes. A collarless white cap-sleeve shirt met a pair of deconstructed, pleated wide-leg black trousers at the bust to create a voluminous dress, finished off with a wide leather belt and gold chain. In other instances, men’s wear-inspired jackets were cropped and combined with denim, or spliced together with trench coats to create dresses that had a modern, cool elegance to them.

Abe said she was also influenced by the English songstress Sade, whose song “Kiss of Life” accompanied the show’s finale. “Her music is very tender but she also has a strength to her, which is what I wanted to express,” the designer said. A portrait of the singer shot by photographer Albert Watson also appeared on black T-shirts, one of which Abe herself wore to the show.

Military and suiting fabrics played a prominent role throughout the collection, juxtaposed with the more delicate or edgy textures of lace and metallics. A bright red shirtdress and A-line skirt alternated sheer and opaque textiles for a cage-like effect, and skirts made from strips of mixed fabrics in different colors and lengths created almost hypnotic movement in a dance with the wind and rain.

Overall, the collection was perfectly streamlined, emphasizing Abe’s many strengths. It was a triumphant homecoming that was met with enthusiasm from the homegrown audience, making people temporarily forget that we’re all living in the midst of a global pandemic.

“I didn’t think about specifically making things that would sell well, but I wanted to do what I always try to do, which is to create things that bring positivity to people who wear them,” Abe said.