Straight, silky hair will be yours with these top flatirons.

Get sleek strands with the best flatirons

All products and services featured are independently chosen by editors. However, WWD may receive a commission on orders placed through its retail links, and the retailer may receive certain auditable data for accounting purposes.

Anyone who knows how to really wield a blow-dryer can get their hair pretty straight with that alone. But when you want super sleek, shiny strands, a flat iron is your best friend. They’re a lot easier than struggling with a dyer and round brush to get the perfect blowout, saving you loads of time and effort. The best flat irons aren’t just for straightening, though — the surprisingly versatile tool can be used for everything from creating flips to S-waves, beachy waves and even curling. Plus, thanks to ionization, flat irons majorly cut down on frizz, leaving smooth, glossy hair behind.

To prevent heat damage, start with the lowest-temperature setting and if that doesn’t get work, gradually work your way up the heat scale. Otherwise, starting off with the highest heat can instantly scorch strands, leaving you with permanent, irreversible damage. A too-high temperature will fry the outer cuticle layer, making hair more porous, so it’ll be tough for it to retain moisture, leading to dry, brittle hair and potentially breakage. For the healthiest hair, avoid using a flatiron every day.

These best flat irons will give you that just back from the salon shiny hair.

Whenever Dyson launches a styling tool it has a fan club before it’s even on the market and that was the case for its flat iron that launched this spring. Considered the best flat iron on the market by many hairstylists, it’s worthy of its splurge of a price tag thanks to its groundbreaking technology. It can be used cordless for up to half an hour, making it easy to use anywhere, sans struggling with a wire. It straightens hair at incredible speed without burning it, leaving strands silky and shiny. There are three heat settings — 330, 365 and 410 degrees Fahrenheit — which are regulated 100 times per second, plus it automatically shuts off for safety after 10 minutes. The unusual flexing plates, made with manganese copper alloy, ensure an even heat application and conform to the shape of your hair to straighten it in less time and with less damage. Since it only takes one pass to straighten hair, it won’t fry locks. Dyson promises 50 percent less breakage as well as less frizz and flyaways. 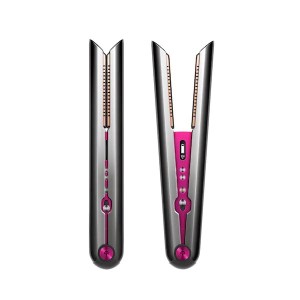 T3 goes the extra mile with the heat settings on this flat iron, offering a whopping nine to ensure customization. The more precisely you can set the heat, the less you’ll damage your hair. (Hint: Texture, density and length all go into the temperature equation, so only those with thick, long strands should be cranking it up.) The Rapid HeatIQ makes it easier to manage the heat technology, plus the new design improves the form and function of the flat iron, including longer plates, a precision hinge for better styling control and StyleEdge Design so that strands smoothly glide right through. 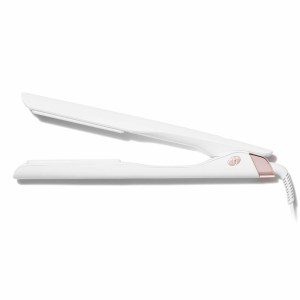 In case you didn’t know, Ghd stands for “good hair day” and that’s exactly what this flat iron brings. Practically a mind reader, the game changing smart flatiron predicts the needs of your hair by determining how thick or thin each section is and adjusts the amount of power accordingly. It always stays at a steady temperature of 365 degrees Fahrenheit to guarantee each section gets the same exact heat, minimizing damage and creating universal sleekness. Using that predictive technology, the temperature is monitored a whopping 250 times per second. Hair is left in optimal condition with less breakage and better color protection. 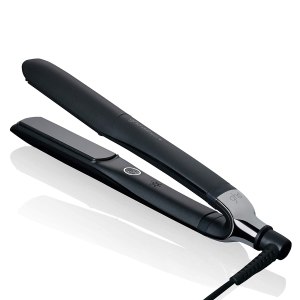 In just a few seconds, the BabylissPro Nano Titanium Prima 3000 heats up to a temperature of 465 degrees Fahrenheit courtesy of its dual-ceramic heating system. It’ll consistently hold the temperature while millions of ions leave hair extra shiny. Equally adept at curling and straightening, it can be used by all hair types to get everything from pin straight strands to beachy waves; its extra long titanium plates turn even curly locks incredibly smooth. 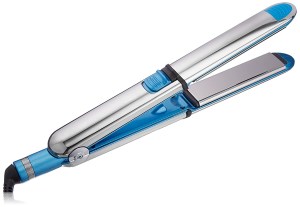 Obviously a mini flat iron is perfect for travel, but you don’t need a getaway planned for Drybar’s Tiny Tress Press Detailing Iron to come in handy. Its petite size makes it ideal for reaching tricky spots — like baby hairs along your forehead or super short bangs — and catching them right at their roots without fear of burning your face. It comes with a travel pouch that does double duty as a heat-protection pad, so it’s also gym bag ready or great for any other on-the-go situation. Expect less frizz and loads of shine thanks to Drybar’s titanium-ceramic technology that seals the cuticle. 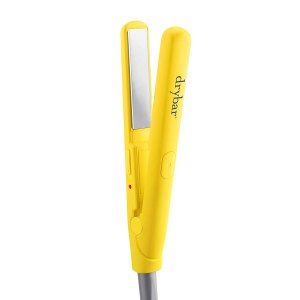 When celebrity stylist Kristin Ess — whose clients include Lauren Conrad and Lucy Hale — couldn’t find the right flat iron that had everything she wanted, she took matters into her own hands and created one that did. Her multitasking flat iron is designed to create four of her favorite styles: sleek straight, s-waves, waves and curls, thanks to the iron’s rounded body. The titanium plates heat up quickly and evenly and feature temperature sensing rapid heat technology, plus they’re corrosion-resistant to styling products. Four temperature pre-sets, up to 440 degrees Fahrenheit, let you customize the heat to your hair type and texture, while negative ions keep moisture and shine in and frizz out. It automatically shuts off after 30 minutes so you don’t have to worry about whether it’s still on after you have left the house. 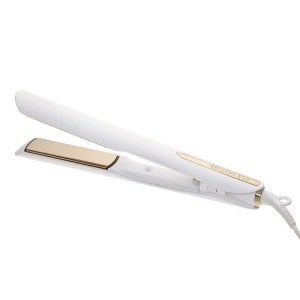 When celeb stylist Harry Josh released his iconic mint green hairdryer, it practically broke the internet and since then every hot tool release has been met with applause. Of course, it didn’t hurt that Gisele Bündchen Instagrammed a shot of Josh using the flat iron on her. Meticulously designed by Josh himself, the straightener’s ceramic and tourmaline plates — which are larger than most other models — heat evenly to require fewer passes, minimizing damage while instantly smoothing hair. Its rounded edges allow for creating waves, plus it automatically shuts off after an hour for peace of mind. 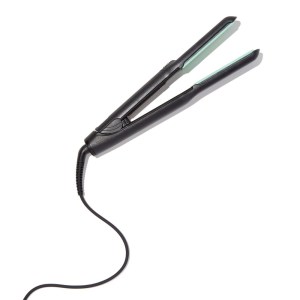 An OG in the flat iron world, this tried and true CHI model has earned its status as a classic. In just 30 seconds it heats up to its pre-set temperature of 392 degrees. Hair is left shiny and hydrated, thanks to the iron’s ability to tap into the power of negative ions. The one-inch ceramic plates glide right through hair to prevent breakage, plus its ergonomic design makes it more comfortable to use in a range of ways, whether that’s to curl, wave or straighten hair. 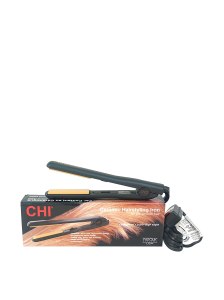 Strands will get more glossy and conditioned with every pass thanks to the impressive technology behind this flat iron. It delivers an infusion of 1000% more negative ions from the combination of the pure tourmaline ceramic plates as well as the negative ion light on the base that sends heat directly into the hair shaft. The pure tourmaline ceramic plates with beveled edges make it easier to create a range of styles, from super straight beach waves, while the floating plates allow you to get as close to the roots as possible with a smooth glide. 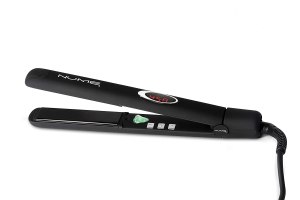