If you’re in the market for the perfect duvet cover, you already know that it can be a tall order.

Luckily, Amazon has lots of options to choose from. Not only do they have variations in fabrics, patterns and textures, but they’re also offered at various price points to suit any budget. The best part is that if you’re an Amazon Prime member, you can get your new bedroom upgrade in only two days without paying for shipping.

When shopping for your ideal duvet cover, you need to take material, breathability and closure type into consideration.

The best part about Amazon having so many choices is that you can switch out your duvet cover each season, which is ideal if you’re a particularly hot or cold sleeper. Styles come in various fabrics, patterns, textures and colors, including brightly-hued options that are perfect for kids’ rooms.

Finally, everyone knows what a pain it can be to get the comforter inside the duvet cover. It’s even worse when the bottom of the duvet cover doesn’t stay shut and you have to continually adjust the comforter inside. To fix these problems, make sure you’re paying attention to the type of closure that the duvet offers. Zippers and buttons that are placed closely together are definitely your best friend if you’re looking to minimize your time spent making the bed. Size is also a big consideration when ensuring that your duvet cover fits perfectly and doesn’t bunch up throughout the night.

To shop some of our favorite duvet covers from Amazon, check out the options below.

You’ll feel like you’re sleeping in a buttery-smooth cocoon with Brooklinen’s Luxe duvet cover. It comes in a few different colors and patterns, so you can match it with just about any design theme. It also has a 480-thread count and sateen weave, which means it will look slightly luminous while feeling super smooth. Finally, it’s machine-washable and has super long corner ties in addition to buttons so that your comforter is always secure. 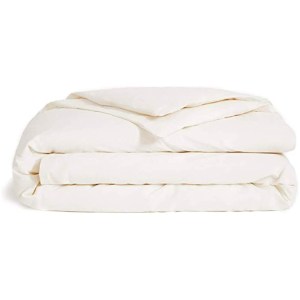 Buffy is known for making the softest bedding out there, and this duvet is no exception. Made out of a eucalyptus fabric, you’ll feel like you’re sleeping in a combination of silk and satin. This fabric is intended to be super breathable, which makes it a good option for warmer seasons and hot sleepers. Reviewers commented that it’s both breathable while still feeling soft and cozy. 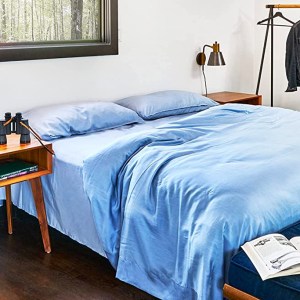 This Nestl set includes one king-sized duvet cover, as well as two pillow shams. It has more than 70,000 reviews and still has a five-star rating. It’s very breathable and made of a soft microfiber. Many reviewers comment on its softness and how easy it is to clean. In addition to being machine-washable, reviewers say that it’s simple to remove pet fur from it since the fabric is so smooth. 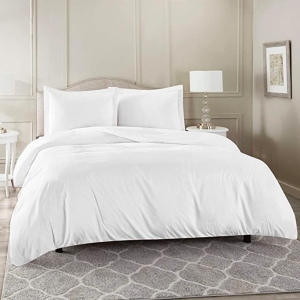 This Bluemoon Homes duvet features large diamond pleats in a soft blush hue. It’s also made of 800-thread-count Egyptian cotton that is super luxurious. In addition to the soft blush color, this comforter is available in six other shades, including darker options. It’s machine-washable and wrinkle-resistant, which is an especially great feature given its texture. 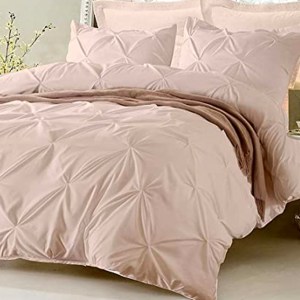 If you’re looking for a way to integrate patterns into your space while still maintaining a serene feel, this Amazon Basics style is the perfect option. It has a white background with taupe vertical stripes. It’s made of a lightweight polyester that is perfect for spring or summer. Reviewers love the snap-closure, which they say makes inserting your comforter an absolute breeze. 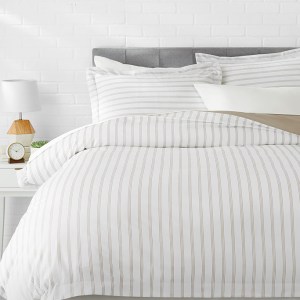 This MooMee duvet cover is made of 100% washed cotton, making it super breathable and easy to clean. The best part is that it has a hidden zip closure, so you never have to worry about the comforter moving around or slipping out. Reviewers love that the color is very neutral and matches just about everything. They also say the material gets softer with every wash. 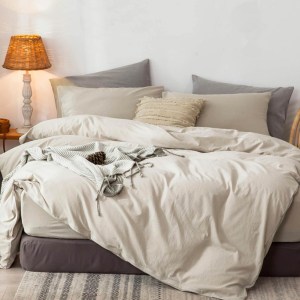 The farmhouse vibe is strong with this linen option from Hyprest. It’s lined with ruffles and available in a range of stunning muted colors. Tons of reviewers praise the size of the cover, which is slightly larger to accommodate fluffier comforters. Many say they loved this option so much, in fact, they ended up buy another one in a different color. 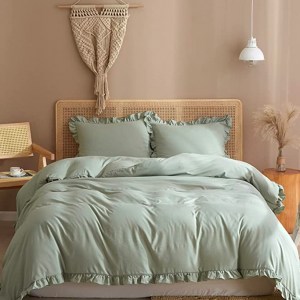 With a 400-thread-count, this ultra-tailored duvet cover from Pizuna will add a polished air to any bedroom. It looks super sleek and comes with two shams to complete the look. It’s very breathable, available in a wide range of colors and made from fade-resistant dyes, so you don’t have to worry about the color changing over time. 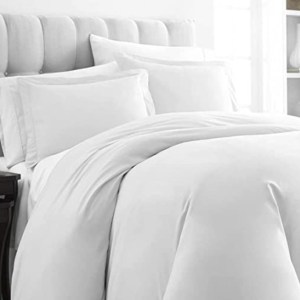 Add a beachy vibe to any room with Jellymoni’s washed cotton duvet cover. It features large wooden buttons that not only keep the comforter secure but act as an easy closure. It’s available in lots of different colors, and reviewers love that the colors in the images perfectly match those of the real-life product. Lots of reviewers also commented on the material’s super smooth texture, with one even mentioning that she had a guest ask for the link to the product after sleeping under this cover. 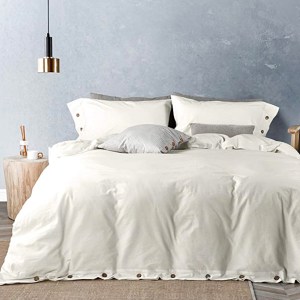 While this Bedsure duvet is available in a stunning blush pink, it also comes in other basic hues like black, white and gray. Additionally, it has a pretty tufted embroidery that will add texture to any space. With more than 5,000 reviews and a near-five-star rating, it’s definitely worth pointing out that this pick is a customer favorite. Many love that it has both a zipper and ties to keep the comforter in place. 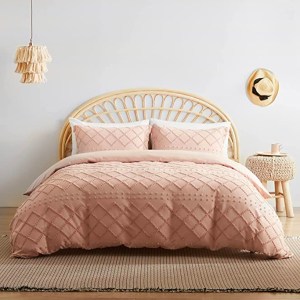 This option from Sijo is great if you’re looking for a super cooling duvet cover. It features coconut shell buttons that are cute and easy to close. Made of eucalyptus, it’s a great option for the summer months. Reviewers continuously commented on how breathable and soft it feels. 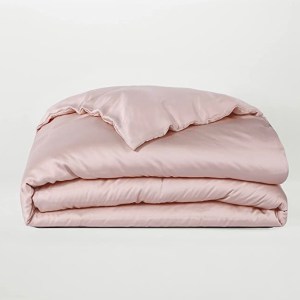 This Warmdern duvet cover set comes with two shams and features a muted gray pattern that will complement any space. It’s super soft, making it a great option for those that don’t want to forfeit either looks or comfort. Reviewers rave about the pattern as well as the feel of this cover. It also has zipper closures that will make it easy to make your bed. 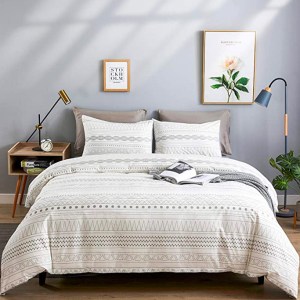