This week in sustainability: Garment Worker Protection Act clears to next vote in Assembly, Ugg to broaden plant-powered ambitions this fall.

Reformation is one business rallying support for the Garment Worker Protection Act.

Businesses Back Garment Worker Bill: SB 62, or the Garment Worker Protection Act, met for another vote in the California State Assembly on Tuesday and is on its way to assembly appropriations.

After a trying process last year in which the bill timed out, the bill was reintroduced in March 2021 at the start of the legislative season. It will need to undergo a series of votes and is holed up in the State Assembly, before it reaches California Gov. Gavin Newsom’s desk.

At present, Los Angeles-based garment workers have come to rely on the state’s taxpayer-fueled Garment Restitution Fund which — as senator and bill author Maria Elena Durazo pointed out — has some discrepancies. The fund carries a balance of $700,000 — yet has $7 million in claims from unpaid garment workers.

Already 140 businesses — including the likes of Reformation, Doen, Christy Dawn, Boyish, Lacausa, Mara Hoffman, Saitex, Eileen Fisher, For Days and Senza Tempo Fashion — have shown support for the bill, which will increase brand accountability for worker wages and eliminate the piece-rate pay system (typically garnering 5 to 10 cents per garment operation) that has long endured within the industry.

As Durazo said, “Mostly women-led, small businesses are leading the charge for ethical workplace and sustainability standards in the garment industry. They endorse this bill to protect highly skilled garment workers from loopholes that have made the industry hostile to ethical garment companies who are trying to eliminate sweatshops,” adding that “Made in the USA” is a marker of quality and better work standards.

A vocal supporter of the bill, founder and creative director of Senza Tempo Fashion Kristen Fanarakis said it “must pass” for the “state to truly be the progressive leader it claims to be on sustainability.”

Scott Wilson, founder and partner of L.A.-based vertically integrated manufacturer Ustrive Manufacturing, spoke in opposition to the bill, citing issues with brand responsibility and fears that customers would bear the brunt of raised production costs.

Trade organizations like the California Retailers Association are also in opposition, with sources saying more apparel brands are quietly protesting the bill despite openly championing sustainability aims. In a letter to Durazo, the American Apparel and Footwear Association also shared concerns about the bill in its current draft.

Ugg’s Plant-Powered Takeover: Should more sustainability enthusiasts be paying attention to the plant-powered ambitions at Ugg?

Last week, Ugg held a commemorative art viewing with sculpture and installation artist Meg Webster for her “Wave” exhibit on Governor’s Island in Manhattan. The zero-waste event was a nod to “Feel Good,” the brand’s sustainability platform that launched in fall 2020, and Ugg’s new suite of “Plant Power” footwear, which debuted earlier this year.

Three signature styles — including the Fluff Sugar sandal made with a sugarcane-based SugarSole EVA-alternative foam and 100 percent Tencel Lyocell from Lenzing for the faux fur — comprise the capsule collection.

For the other two styles, small-batch soles are made of natural latex harvested from the Hevea rubber tree, which deters deforestation as the trees are not felled for 25 years.

According to Andrea O’Donnell, president of Ugg and Koolaburra by Ugg at Deckers Brands, the ambitions don’t start and end with one capsule.

“As the first brand to make faux fur from 100 percent Tencel Lyocell, we will debut two collections with this innovation next fall,” O’Donnell said. “We will also steadily increase our use of SugarSole across the main line, starting with Classics and slippers. At Ugg, we aim to incorporate 50 percent certified responsible and sustainable materials in our footwear products (including recycled, renewable, regenerated and natural) by fiscal year 2022.”

The teaser comes at an exciting time for material innovation where brands like Allbirds (with its “Plant Leather” shoes coming in the fall), Gucci (with footwear made with its in-house developed “Demetra” already available) and many more are planning lines that phase out virgin synthetics for plant-based alternatives.

Ugg recently dropped its June collaboration with Telfar and has been enjoying new relevance as Crocs, Tevas and other comfort shoes lock arms with the fashion set. 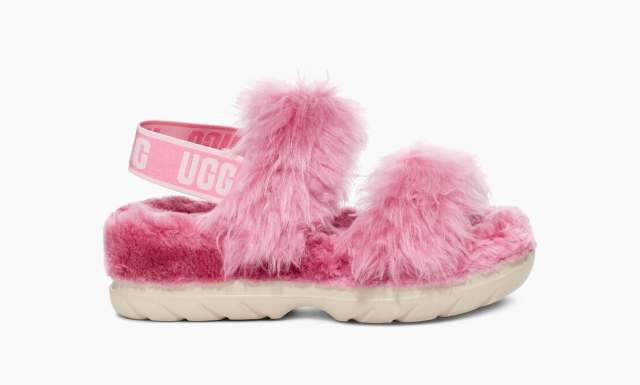 Ugg will expand the innovations seen in its three-piece Plant Power collection this fall.  Courtesy