Where the Fashion Pact Stands, One Year In

The Fashion Pact revealed its one-year progress at the Copenhagen Fashion Summit’s first virtual summit, with a new published report.

A panel conversation on the Fashion Pact held at the virtual CFS+.

The Fashion Pact has whittled down its targets, though the effort only marks first steps in the ongoing fight for the industry’s sustainability.

“Our governance is now well in place and we have defined tangible targets and key performance indicators. But the road ahead is long. This report is inherently incomplete. Our ambition is such that we cannot achieve everything in one year,” read the foreword of the Pact’s progress report, published Monday.

Launched in August 2019 by Kering’s chairman and chief executive officer François-Henri Pinault, with buy-in from a number of chief executive officers, The Fashion Pact leans into science-based carbon emissions reduction targets in line with an aim to limit global temperature rise to the so deemed “safe” 1.5-degree Celsius trajectory, as defined by the Paris Agreement.

In a panel at the virtual Copenhagen Fashion Summit and Monday, executives from PVH Corp., Chanel and Gap Inc. as well as Paul Polman, cofounder of Imagine, a U.K.-based for-benefit organization mobilizing business leaders on global issues — discussed the Pact’s one-year progress.

“Given my financial and operational background, for me, everything needs to be measured if you’re going to have success. It’s an essential part of demonstrating we are serious about what we are undertaking and this is not just public relations,” said PVH Corp. ceo Manny Chirico.

The Pact represents a third of the global fashion industry, with more than 60 signatories representing over 200 brands, and companies like Adidas, Inditex, Kering and H&M Group are among the cohort tackling the Pact’s three key pillars: climate change, biodiversity loss and ocean conservation.

To date, 80 percent of members said joining the The Fashion Pact accelerated sustainability efforts within their companies. 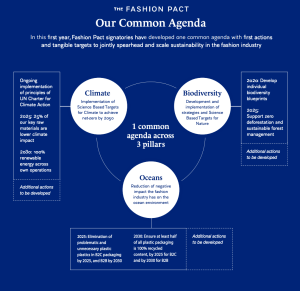 The common agenda of the Fashion Pact, revisited in an October progress report.  Courtesy

“The Fashion Charter on Climate Action and Science Based Targets are the most important frameworks we have for a meaningful reduction of greenhouse gas emissions,” Bjørn Gulden, chairman and ceo of Puma, noted in the progress report. “By building upon these initiatives, The Fashion Pact takes the collaborative spirit further, and ensures credible impact and action.”

The Pact credited strategic partners like Boston Consulting Group for development of priority areas, reporting metrics and baselines as well as environmental services organizations like 2050 and Systemiq (climate), Conservation International (biodiversity) and The Reset Company (oceans). The coalition paid praise to a number of industry “conveners” including Textile Exchange and Sustainable Apparel Coalition, which it relied on for data and insight.

Since its launch, the Fashion Pact says 40 to 45 percent of all energy consumed by its members now comes from renewable sources (in owned facilities), and 70 percent of signatories reported reducing unnecessary and harmful plastic packaging.

A snapshot of plastic reporting from the Fashion Pact’s October report.  Courtesy

Signatories like Karl Lagerfeld, Moncler, and Everybody & Everyone, for example, said they’ve switched all polybags to those comprised of 100 percent recycled content, while brands like Burberry have followed up on the promises originally made in the New Plastics Economy global commitment, which is working to unite businesses, governments and organizations to address plastic waste and pollution.

A separate portion of the progress report on biodiversity, however, noted only 30 percent of signatories reported they “have mapped their supply chains,” which is the first step in being able to make a commitment to improving biodiversity impacts as it can’t be done without an assessment of current risk.

The question now is, how will the Pact’s leaders make further progress on the three pillars?

“I think the key is transparency,” Chirico said. “Just like we are held accountable for our financial results, driving our earnings per share, driving our sales growth — we do that by first and foremost putting ourselves out there, putting the goals and objectives out there for each of our companies, and then at the same time — driving toward those goals.”

One thing the industry will have to work to improve is its rapport with suppliers. As per insight from garment worker watchdogs Remake and the Worker Rights Consortium, Fashion Pact members like Bestseller still aren’t off the hook, for the way it handled payments owed to its suppliers in the heat of the pandemic.

“We must think about the challenge of sustaining the healthy fashion industry in addition to the impact and the challenge with meeting and exceeding the goals and they dovetail very nicely,” Gap Inc. ceo Sonia Syngal, said on Monday’s panel. “I think it comes down to the simple truth — can we in good conscious know that the workers that work in our industry, at night when they’re at the dinner table with their families, can feel good about how we are treating their communities, their planet, their local water, their local biology? And at the same time can we push forward with health for the industry? The challenge is great, but the imperative is even greater.”

The Fashion Pact did not outline incentives like these but went on to describe its steering committee, led by Pinault and Polman. Both executives act as co-chairs of the Fashion Pact Steering Committee devoted to “actively driving collective action.” It is a 14-strong team focused on strategic direction and decision-making which pulled volunteers from signatories including Bestseller, Burberry, Chanel, Etam Group, Farfetch, FashionCube, Moncler, Noabrands, PVH Corp., Ralph Lauren, Salvatore Ferragamo and Tendam.

Of course, some signatories (like H&M, Kering) have maintained variable remuneration for executives on the fulfillment of sustainability targets, although such incentives were dented by the pandemic.

WWD asked for clarification as to whether the ceo-led Steering Committee, or The Fashion Pact broadly, posed an incentive for executives in meeting sustainability targets, to which Eva von Alvensleben, executive director and secretary general of The Fashion Pact said: “Indeed, tying executive compensations to climate goals is one effective measure to accelerate actions within companies — however, which measure to implement within the companies to achieve our ambitions commitments is at the discretion of the ceo and reflected in their individual action plans and strategies.”

But the Pact’s ability to organize ceos around concrete goals, Alvensleben added, is unique.

“The industry continues to grow, but the overwhelming understanding amongst The Fashion Pact is that now is the time to change the system, we do not have time to lose,” she said. “Our signatories are committed to delivering on the targets that have been collectively set, because there is no alternative.”

As for what’s in store, the Pact will continue to unite its membership coalition and external advisors to outline and act on measures to improve the fashion industry. A private digital dashboard for its primary metrics is in development and “will be used to aggregate and display progress in terms of what we’ve done and where we’re headed, according to a series of pragmatic, meaningful, and measurable KPIs (determined along with our technical delivery partners and BCG).”

“The Fashion Pact proves that courageous ceos, acting as one to transform entire industries, can deliver us into a future of harmonious coexistence between nature and business. To those not already on board: it is within your power to hasten our progress. All you have to do is join us,” Polman said.