Los Angeles is home to the largest garment manufacturing hub in the U.S. with 46,200 garment workers employed across cut-and-sew garment activities. The industry is the second-largest manufacturing center — and creative economy — in all of Los Angeles county.

“Unfortunately, it’s also a sweatshop industry,” said Marissa Nuncio, director of the Garment Worker Center in a press conference last Wednesday in support of the relaunch of the Garment Worker Protection Act (formerly SB 1399, now referred to as SB 62). The bill will eliminate piece-rate pay, expand liability for wage theft and expand the ability of the Labor Commissioner’s Bureau of Field Enforcement to investigate and cite guarantors.

GWC’s latest report shows how persisting industry practices leave workers vulnerable to COVID-19 exposure and incessant wage theft. The report gained insight from more than 200 garment workers and GWC members who supply labor for over 100 different fashion brands, including Fashion Nova, Forever 21, Windsor, Charlotte Russe, Urban Outfitters and Lulus — all “top violators” cited in wage theft cases by GWC reports but with no legal liability due to loopholes in the current legislation that lets brands off the hook for subcontractors.

“What our report shows is that the piece rate is the primary system of paying garment workers in this industry and that is where workers are only earning according to their output,” Nuncio explained. “They’re getting paid pennies at a time — 2 cents, 3 cents — for sewing or other garment operation.”

By GWC’s report, garment workers in Los Angeles made roughly $5.85 an hour, or $334 a week on average, for more than 57 hours of labor, without compensation for meal and rest breaks. GWC equated this to roughly $601 a week, on average, in stolen wages. Workers surveyed drum up an average of 20 years of experience — the same amount of time the state’s Garment Restitution Fund (which was meant to be a payor of last resort to wage theft case winners) has been around collecting dust while a waitlist of garment workers were seeking restitution for wage theft. Last year, the fund was finally given a sizable budget ($7.3 million initially) to even out payments to winners of wage theft cases, some of whom had waited years for the money.

“We live in a world where a T-shirt costs as much as a cup of coffee, even when they’re made in the U.S.,” Kristen Fanarakis, founder and designer of L.A.-based label Senza Tempo Fashion, said at the press conference. Her brand is entirely cut-and-sewn in L.A. and is one of many — including Reformation and Suay Sew Shop, among others — teaming up for justice in GWC’s business coalition in support of the bill.

A lot is riding on the passage of SB 62 for workers and ethical businesses alike in defining a sustainable fashion future — and the value of “Made in America.” 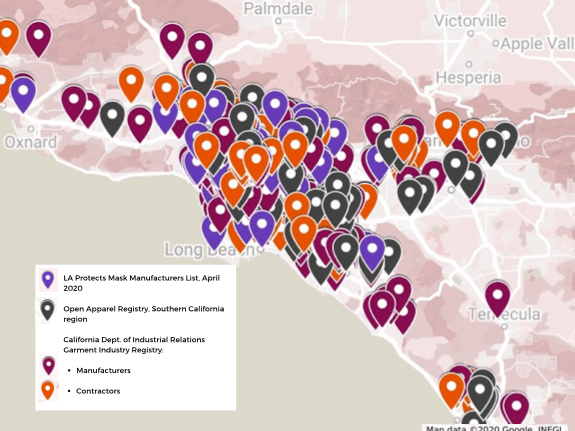 “For me, the ‘Made in America’ label has value from both the legal and monetary perspective,” said Fanarakis. “Personally, as a North Carolinian, a state with a long history in the textile industry like California, I wanted to create a new quality and classic American brand — the kind that I grew up with, and it’s why I only considered domestic manufacturers before launching the company,” she added. “The companies who try to subvert the law by paying less than the minimum wage in order to offer artificially low prices to consumers hurts a brand like Senza Tempo who believe in the ethics of domestic manufacturing as well as the economics.”

The businesses that do ensure fair minimum wages and good working conditions find it increasingly difficult to remain competitive. Today, the “Made in L.A.” label is in jeopardy of being tarnished by “bad actors,” in the words of Senator Durazo. However, the bill’s supporters remain optimistic and vigilant in hopes of the bill passing in 2021.

GWC’s report uncovered one such bad actor where another 176 employees were exposed to the coronavirus at distribution centers for brands like Fashion Nova. Workplaces lacked proper sanitation and workers were denied a safe working distance, personal protective equipment and proper sick leave, by testimony of workers surveyed.

Since 2006, Fashion Nova has prided itself on having the freshest assortment of new styles and big-name collaborations with the likes of Cardi B and Megan Thee Stallion. Its well-oiled influencer machine funnels $20,000 in modest estimates into star-powered wardrobes and Instagram posts, culling likes and sales, and in some collaborations — a quick $1 million in 24 hours in either case.

A most-searched fashion brand in 2017, according to Google, Fashion Nova is vocal about its #NovaBabes and general community relief, but less so its inner workings. Earlier this year the brand partnered with Cardi B to help those individuals heavily impacted by the pandemic, followed by a similar $1 million commitment to support diversity-related causes like Black Lives Matter and the NAACP Legal Defense Fund through its Fashion Nova Cares program.

“People are struggling to pay rent, buy food, medicine and other essentials for themselves and their families. We all feel compassion and concern for those affected by the coronavirus,” Richard Saghian, founder and chief executive officer of Fashion Nova, said in an April statement accompanying the program’s launch. “Fashion Nova Cares with Cardi B will provide people with necessary relief to help them get through this crisis. As a community-driven brand, we are inspired by the kindness and generosity of others and we wanted to do our part to help those in need.”

Eerily, those same concerns — rent, food and basic utilities — were all desperate needs the majority of frontline garment workers cited in the GWC report, all deemed essential by the state for the manufacture of personal protective equipment (a luxury denied them in many cases).

“I feel like many people — celebrities and influencers alike — are too interested in their own paycheck to take a stand,” said Aja Barber, a writer and fashion consultant living in South East London. “It’s pretty disappointing because if we had solidarity, we could change things immediately.”

Barber’s work focuses on sustainability, ethics, intersectional feminism, racism and power dynamics in buying. Projecting her thoughts on the bill’s outlook, she said, “Legislation should stop brands from passing on these costs to consumers. However, consumers have to get used to the idea that a lot of the prices we see are exploitative prices. Consumer mind-set has to change in a lot of ways. The cheapest item isn’t always the best but unfortunately, that’s the mind-set that rapid consumption has pushed.”

Destiny M., a customer and recipient of the Fashion Nova Cares relief, said she likes Fashion Nova for its cute clothes, the way the outfits fit and the ability to buy clothes for her boyfriend. She lamented some oversight: “I don’t know much about the brand; I do know the sizes are great…My boyfriend loves it — everything fits perfect for him as well, and he totally changed his style off of the clothes they sell.”

When asked whether she considers the way garment workers are treated for any of the brands she buys, Destiny said she was unsure — a response that may echo recent reports that find consumers aren’t factoring social costs in their garments.

If social costs aren’t being considered by some brands — what’s to say they won’t go elsewhere in the face of new labor laws?

Trade challenges and a globalized race-to-the-bottom has long shaped the domestic textiles industry. Post World War II, the Bureau of Labor Statistics noted that apparel manufacturers were shifting to the South and West in droves, in some cases 40 percent or more in production, in 1953.

Fanarakis cautioned against an outright comparison.

“The size and dynamism of Los Angeles should keep it from destroying the industry — what you have to hope to see is more brands like mine doing higher-end work for premium. The jobs in L.A. that aren’t paying the minimum wage should have gone overseas if they wanted cheap labor the way so many other brands do. They likely don’t because of logistics, need for speed to market and/or wanting to use the Made in L.A. label — so there are reasons why they are subverting the law that make offshoring not as clear cut of a case,” Fanarakis said. “How the bad actor brands respond will depend on which of these factors are driving the decision to operate in this manner.”

While GWC did not estimate the number of so-called bad actors, the majority of L.A. garment workers experience wage theft at some 4,000 manufacturers and contractors based in the district.

The bill was introduced last week on the first call for bill submissions for the 2021 legislative season. Its supporters are looking to keep momentum this year and not see a repeat of what happened in August — missing the vote before the state Assembly adjourned.